If you own a retirement plan or IRA, when was the last time you reviewed your beneficiary designation? (When you die, who gets the money?) It’s important to keep this information current. Here’s why, from The Truth About Retirement Plans and IRAs.

Here’s an example of what can happen if you don’t keep your beneficiary designation current. A gentleman participates in his retirement plan at work and names his wife as his primary beneficiary. They divorce a few years later. Fast-forward some more years and he gets married for a second time. They have a child and 10 years after that, the gentleman dies. When his widow contacts his employer, she discovers that the first wife—whom the deceased hadn’t seen in more than 30 years—is still named as the beneficiary on his retirement account. Turns out the gentleman never thought to update it. The result: The first wife gets the money. His widow and their daughter get none of it. If you don’t name anyone as your beneficiary, your estate becomes your beneficiary. That means your heirs are determined by your will. And if you haven’t signed a will, then (following your death) the money will be distributed by order of the probate court. The result: You lose control over who gets the money — and the person or persons who get the money might not be whom you’d have selected. Don’t leave it to a judge to choose your beneficiary. Name yours by completing the paperwork when youopen your retirement account and IRAs. 401k.

Don’t expect the courts to help in a case like this. The court case of John Hunter tells the tale. John was an employee of Marathon Oil, and in 1990 he designated his wife, Joyce, as his primary beneficiary for his 401(k). He signed a new document the same way in 2001. Neither time did he name a secondary beneficiary.

Joyce died in a traffic accident in 2004, but John didn’t designate a new beneficiary. When he died the next year, the plan administrator, Eileen Campbell, distributed the money in John’s account (more than $300,000) to his six brothers and sisters. She was aware that Joyce had two sons, Stephen and Michael Herring, and she was equally aware of how John felt about his stepsons: In his will, John left his entire estate to them, calling them his “beloved sons.” But he had never legally adopted them, so Eileen concluded that the boys were not in the line of succession under the terms of the company plan. (As is often the case, accounts with no named beneficiaries are distributed in this order of priority: surviving spouse, children, parents, siblings and executor of the estate.)

The boys challenged the distribution, claiming they were entitled to the money, citing their close relationship to Hunter as referenced in his will. The boys won their lawsuit.

But Eileen appealed, arguing that Marathon Oil’s retirement plan gives the administrator “discretionary authority” to determine eligibility for benefits. The Fifth U.S. Circuit Court of Appeals (in Herring vs. Campbell) upheld her decision to give the money to John’s siblings instead of Joyce’s sons.

It took six years and tens of thousands of dollars in legal fees for the boys to learn they would not inherit the money in their stepfather’s retirement account.

The lesson is clear: Review your documents to make sure that whomever you named as your beneficiary is still accurate. 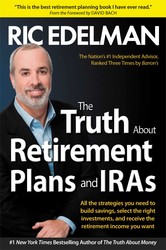 Truth About Retirement Plans and IRAs
by Ric Edelman

From the #1 independent financial advisor in America, ranked three times by Barron’s: a guide to making the most of your retirement plans and assuring long-term financial security.