Are luxury cars really worth the money? You might be surprised with the answer, and why. From my book, Happy Money: The Science of Smarter Spending.

Like houses, cars are among the largest purchases that most people make. Is it best to splurge on a BMW, economize with a Ford Escort, or settle for the mid-level option of a Honda Accord? When researchers at the University of Michigan asked students to predict how much pleasure they would experience while driving each type of car, the BMW was the clear winner. But do drivers experience more happiness behind the wheel of an expensive car? To find out, the Michigan researchers asked car owners to think back on the last time they had driven their car, rating how much they enjoyed that drive. Although their cars ranged widely in value, from around $400 (a Yugo, perhaps?) to $40,000, there was no relationship at all between the Blue Book value of the car and the amount of enjoyment the owners got from driving it that day.

But here’s the twist in the road: The researchers asked other drivers to list their car’s make, model, and year, and then consider how they typically felt while driving it. When car owners thought about their vehicles in this light, those who owned more expensive cars reported deriving more enjoyment from driving. Suddenly there was a relationship between a car’s value and its emotional payoff. Why? When people are asked how something generally makes them feel, they tend to draw on equally general theories to form an answer. Rather than reconstructing how they felt each of the last fifty times they drove the Bimmer and then averaging these experiences, a BMW owner is likely to think something like, “I own a midnight blue Z4 with three hundred horsepower and a retractable hardtop. Of course I enjoy driving it. Next question.” These undeniably fabulous features are likely to make a big difference for enjoyment during an initial test drive, which is why smart salespeople focus our attention on these features at the time of purchase. Novelty attracts the spotlight of attention, focusing our minds and exciting our emotions. But once we get used to something—even something as nice as a midnight blue Z4—the spotlight moves on. Driving to the grocery store in the dead of winter, we think about being stuck in the left lane behind an octogenarian in an Oldsmobile, about whether the store will have any hot rotisserie chickens left, about almost anything other than the make and model of the car we’re driving. Retractable hardtops just aren’t that relevant in subzero temperatures. And this explains why driving a more expensive car doesn’t usually provide more joy than driving an economy model.

Unless, that is, we make driving a treat. In a final study, the Michigan researchers asked car owners to think about the last time they had driven their car just for fun. When people thought back on their most recent joy ride, individuals with more expensive cars reported more pleasure from driving. But these joy rides were remarkably rare. So, driving a BMW probably won’t provide you with any more pleasure than driving a Ford Escort—except on those rare occasions when your attention turns to the car itself, whether directed by a question from a researcher or a joy ride on a winding mountain road. 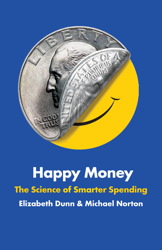 Happy Money: The Science of Smarter Spending
by Elizabeth Dunn

Happy Money offers a tour of new research on the science of spending. Most people recognize that they need professional advice on how to earn, save, and invest their money. When it comes to spending that money, most people just follow their intuitions. But scientific research shows that those intuitions are often wrong.

Happy Money explains why you can get more happiness for your money by following five principles, from choosing experiences over stuff to spending money on others.