High achievers in every field share similar characteristics, some combination of talent and drive that fuels their success. At the beginning of my own career, I devoted my time to figuring out what separates the people with talent who achieve and the people who drop out. From my book, Grit.

As a graduate student just beginning to probe the psychology of success, I was interviewing leaders in business, art, athletics, journalism, academia, medicine, and law: Who are the people at the very top of your field? What are they like? What do you think makes them special?

Some of the characteristics that emerged in these interviews were very field-specific. For instance, more than one businessperson mentioned an appetite for taking financial risks: “You’ve got to be able to make calculated decisions about millions of dollars and still go to sleep at night.” But this seemed entirely beside the point for artists, who instead mentioned a drive to create: “I like making stuff. I don’t know why, but I do.” In contrast, athletes mentioned a different kind of motivation, one driven by the thrill of victory: “Winners love to go head‑to‑head with other people. Winners hate losing.”

In addition to these particulars, there emerged certain commonalities, and they were what interested me most. No matter the field, the most successful people were lucky and talented. I’d heard that before, and I didn’t doubt it.

But the story of success didn’t end there. Many of the people I talked to could also recount tales of rising stars who, to everyone’s surprise, dropped out or lost interest before they could realize their potential.

Apparently, it was critically important—and not at all easy—to keep going after failure: “Some people are great when things are going well, but they fall apart when things aren’t.” High achievers described in these interviews really stuck it out: “This one guy, he wasn’t actually the best writer at the beginning. I mean, we used to read his stories and have a laugh because the writing was so, you know, clumsy and melodramatic. But he got better and better, and last year he won a Guggenheim.” And they were constantly driven to improve: “She’s never satisfied. You’d think she would be, by now, but she’s her own harshest critic.” The highly accomplished were paragons of perseverance.

Why were the highly accomplished so dogged in their pursuits? For most, there was no realistic expectation of ever catching up to their ambitions. In their own eyes, they were never good enough. They were the opposite of complacent. And yet, in a very real sense, they were satisfied being unsatisfied. Each was chasing something of unparalleled interest and importance, and it was the chase—as much as the capture—that was gratifying. Even if some of the things they had to do were boring, or frustrating, or even painful, they wouldn’t dream of giving up. Their passion was enduring. 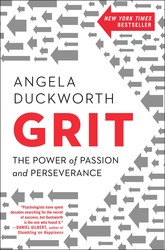 Grit: The Power of Passion and Perseverance
by Angela Duckworth

In this instant New York Times bestseller, pioneering psychologist Angela Duckworth shows anyone striving to succeed—be it parents, students, educators, athletes, or business people—that the secret to outstanding achievement is not talent but a special blend of passion and persistence she calls “grit.” Drawing on her own powerful story as the daughter of a scientist who frequently noted her lack of “genius,” Duckworth, now a celebrated researcher and professor, describes her early eye-opening stints in teaching, business consulting, and neuroscience, which led to the hypothesis that what really drives success is not “genius” but a unique combination of passion and long-term perseverance.