Watching financial shows on television can be addictive. The continuous flashing lights, noise, and inevitable doomsday predictions will raise adrenalin levels in any human being. But do hyped-up worries over market corrections really help your bottom line? Read more in Unshakeable: Your Financial Freedom Playbook.

Have you ever listened to the pundits on CNBC or MSNBC talking about the stock market? Isn’t it amazing how dramatic they can make it sound? They love talking about volatility and turmoil because fear draws you into their programming. They’re constantly analyzing minicrises that prognosticators predict could trigger market mayhem. The crisis in question might be unrest in the Middle East, slumping oil prices, the downgrading of US debt, a “fiscal cliff,” a budget standoff, Brexit, a China slowdown, or whatever else they can milk for excitement. And by the way, if you don’t understand these things, don’t worry: most of these experts don’t either!

I don’t blame them for peddling drama. It’s their job. But between you and me, none of this is really that exciting. A lot of it is just hyped up to stop you from reaching for your remote control. The trouble is, all this babble, all this drama, all this emotion can make it hard for us to think clearly. When we hear these “experts” speaking in grave voices about the possibility of a correction or a crash or a crisis, it’s easy to become anxious because it sounds like the sky is about to fall. It might make for good TV, but the last thing you and I want is to make fear-based financial decisions. So we have to remove as much emotion as possible from this game.

Instead of getting distracted by all this noise, it helps to focus on a few key facts that truly matter. For example, on average, there’s been a market correction every year since 1900. When I first heard this, I was floored. Just think about it: if you’re 50 years old today and have a life expectancy of 85, you can expect to live through another 35 corrections. To put it another way, you’ll experience the same number of corrections as birthdays!

Why does this matter? Because it shows you that corrections are just a routine part of the game. Instead of living in fear of them, you and I have to accept them as regular occurrences—like spring, summer, fall, and winter. And you know what else? Historically, the average correction has lasted only 54 days—less than two months! In other words, most corrections are over almost before you know it. Not that scary, right? 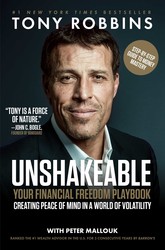 After interviewing fifty of the world’s greatest financial minds and penning the #1 New York Times bestseller Money: Master the Game, Tony Robbins returns with a step-by-step playbook, taking you on a journey to transform your financial life and accelerate your path to financial freedom. No matter your salary, your stage of life, or when you started, this book will provide the tools to help you achieve your financial goals more rapidly than you ever thought possible. Robbins, who has coached more than fifty million people from 100 countries, is the world’s #1 life and business strategist. In this book, he teams up with Peter Mallouk, the only man in history to be ranked the #1 financial advisor in the US for three consecutive years by Barron’s. Together they reveal how to become unshakeable—someone who can not only maintain true peace of mind in a world of immense uncertainty, economic volatility, and unprecedented change, but who can profit from the fear that immobilizes so many.