When men are unsettled by women’s higher earnings, envy or resentment aren’t always to blame, says Liza Mundy in The Richer Sex. Men continue to place intense pressure on themselves to earn—here’s what’s really driving them to do so.

Men still think of breadwinning as an obligation. Men feel they should contribute as much as or more than women do, and blame themselves when they can’t. This, for men, is probably the greatest reason they struggle with women’s earnings. Men have changed their minds about what’s okay for women, but not about what’s okay for men. If there is a double standard, it’s that men are easier on women, in terms of expectations
for earnings, than they are on themselves.

Sociologists Ilana Demantas and Kristen Myers illuminated this mind-set when they interviewed a group of men who had been laid off during the Great Recession. Many were being supported by wives or girlfriends. These men were full of appreciation for the women they lived with. They understood how valuable it is to have a partner who loves you and will stand by you in a crisis. “It’s a blessing that my wife works and makes good money,” one interviewee told the researchers, who presented their findings at a conference in 2011. “If I was living on my own, I would be in serious trouble.” To show their gratitude, these men were helping in any way possible. “I pick up the slack around the house more because I feel like it is the only way to repay my duties,” said one. Another said, “I get up early and make coffee every day for Colleen before she goes to work. I don’t even drink coffee, but I make it for her. She gets to sleep a little longer.”

Reflecting on these findings, the study authors ventured that men have come to a psychological crossroads. The economic crisis presented them with “a unique space” in which to reconsider everything they believed about women and earning up to now. We have come a long way since the 1930s: during the Depression, women who found ways to support their families were resented not only by the culture but also by the very people they were supporting. Boys who took jobs to help out were accorded the head place at the dinner table, while mothers who did the same were remembered bitterly by their own offspring. Not any longer. “Our respondents valued women’s work as essential to the survival of their family,” they noted. “Instead of expressing resentment toward the women upon whom they relied, these men expressed gratitude and respect for women’s paid work.”

But the men in the study still felt they should be contributing. They were deeply shaken by their inability to provide, and sometimes wept when they were talking to her. In that sense—men’s expectations for themselves—we do not seem to have come so far. “You kind of
feel almost worthless,” one man told the interviewers. Another commented, “It makes you, or at least it did me, feel like less of a man.” The truth is, if men are troubled by women’s higher earnings, often it’s only because men worry they have fallen short. Some fear their wives will leave them. If they aren’t bringing in income, what are they bringing? 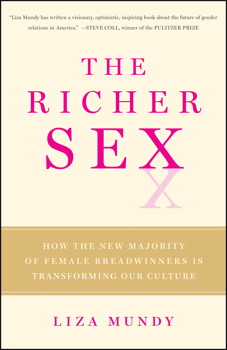