Even when you’re unhappy, the prospect of leaving a secure job to follow your dreams can be daunting; Fear of failure is hard to ignore. Yet the rewards of answering your true calling are immense. Dr. Tererai Trent, author of THE AWAKENED WOMAN, shares the story of a woman who did just that and reflects on how taking a chance on your dreams can lead to an opportunity you never could have imagined when you started on that path.

In 2009, Diane Ramsey had a well-paying, impressive corporate job. She also volunteered her time as conference chair for an organization that would subsequently become Iowa Women Lead Change (IWLC), a nonprofit whose sole focus is to advance women’s leadership. For months leading up to the conference, Diane spent nights and weekends and every free moment of her seventy- or eighty-hour workweek helping to make their annual conference a success.

One day Diane and her supervisor, the highest-ranking woman in the organization, had a meeting in Diane’s office. Her boss flippantly picked up the conference program and then flicked it back down on the desk. “I haven’t even looked at this,” she said. “I don’t believe in women’s conferences, or women’s leadership for that matter.”

These words were profoundly destructive and hurtful to Diane. “With those few words,” Diane recalls with impressive clarity, “she had entirely devalued that experience and my contributions.” Diane remembers that this woman did everything she could to undermine the strong women who worked for her. In that moment, she says, she knew that in too many instances she had allowed her boss to take her power.

Not long after this exchange, Diane left her job. She had no plan, no idea of what she would do. All she knew was that she had a dream: the desire to do something that was mission driven. Then she was approached to lead the grassroots organization that would become IWLC.

“After working in corporate positions my entire career,” Diane reflects, “my husband wondered if I’d ever be hired for a ‘real’ job again. People did not understand why I would give up the security and compensation of my position and want to work that hard for something that many people didn’t understand, or value.” Deep down, though, Diane knew this was something she had to do. “I had not been born with wealth or privilege, yet have had opportunities and experiences that I could never have imagined having.” She had to share that with other women.

As Diane began devoting more of her time to the next Iowa Women’s Leadership Conference, she also began transitioning the grassroots group from an event to an organization focused on advancing women throughout the region—and she was offered a brand-new role: chief executive officer.

In the fall of 2012, I spoke at a luncheon in Des Moines, Iowa. Diane was in attendance. I provided each attendant with their own “dream can” and asked them to write a sacred dream down and bury it somewhere safe. On Diane’s slip of paper, she says, she wrote “make IWLC self-sufficient.”

Her planted dream quickly bore fruit: “After I wrote down my dream for IWLC to become self-sufficient, we had our biggest conference to date with Martha Stewart and Gloria Steinem (among others). Conference registrations for nearly a thousand seats sold out in two weeks. That gave us a cash reserve so that our fledgling organization could move out on its own.”

On November 1, 2013, Diane moved into IWLC’s first office. The organization continues to grow. They have had more than nineteen thousand women attend their events. Diane reflects, “Every day I get up knowing that I am helping other women. I have so many ideas about new programs and projects flowing that it can be difficult to prioritize. I have surrounded myself with women I respect, who share the passion around our mission, and with whom I enjoy working.”

Diane often hears from women for whom IWLC has given them back their voices. One young woman who was completing her PhD in psychology decided not to go into private practice after attending the conference on an IWLC scholarship. Instead, this young Latina chose to move to a community in Iowa with a large Hispanic population, because she believed it was the best way for her to impact the greater good. Diane’s mission continues to expand.

“We have fueled a passion for women to invest in themselves and not settle for the status quo,” Diane says proudly.

Want more? Pick up a copy of Dr. Trent’s THE AWAKENED WOMAN, a manifesto that inspires women to pursue their sacred dreams through 9 essential lessons. You never know what opportunity is around the corner.

Still searching for your true calling? Find your Great Hunger to find your life’s purpose.

Excerpted from The Awakened Woman by Dr. Tererai Trent. Copyright © 2017 by Tererai Trent, PhD. Used by permission of the publisher. All rights reserved. 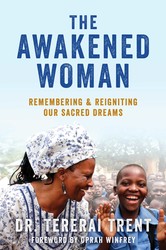 The Awakened Woman
by Tererai Trent

Nominated for a 2017 NAACP Image Award Through one incredible woman’s journey from a child bride in a small Zimbabwe village to one of the world’s most recognizable voices in women’s empowerment and education, this manifesto inspires women to pursue their sacred dreams through nine essential lessons brought forth from ancient African wisdom.Before Tererai Trent landed on Oprah’s stage as her “favorite guest of all time,” she was a woman with a forgotten dream. As a young girl in a cattle-herding village in Zimbabwe, she dreamed of receiving an education but instead was married young and by eighteen, without a high school graduation, she was already a mother of three. Tererai encountered a visiting American woman who assured her that anything was possible, reawakening her sacred dream. Tererai planted her dreams deep in the earth and prayed they would grow. They did, and now not only has she earned her PhD but she has also built schools for girls in Zimbabwe, with funding from Oprah.