Job seekers often forget to prepare for the opening minutes of a job interview. First impressions are formed within seconds of meeting someone, and become filters through which future words and actions are judged. Employers are predisposed to hire people they like and to hire those people who share the same values and interests as they do; therefore, a job seeker’s likeability quotient can mean the difference between employment and unemployment. Try these simple tips to ensure you create a good first impression and establish common ground with a potential employer.

Friendship Signals
When people greet one another, they give off nonverbal friendship signals to let the other person know that they are not a threat. The three major friend signals are the eyebrow flash, the head tilt, and the smile.

The Head Tilt
The head tilt is a strong friend signal. People who tilt their heads when they interact with others are seen as more trustworthy and more attractive. The tilted head exposes one of the carotid arteries, which are positioned on either side of the neck. The carotid arteries are the pathways that supply the brain with oxygenated blood. Severing either carotid artery causes death within minutes. People expose their carotid arteries when they meet people who do not pose a threat.

The Smile
The smile is a powerful friend signal. A smile portrays confidence, happiness, enthusiasm and, most important, signals acceptance. A smile telegraphs friendliness and increases the attractiveness of the person who is smiling. The mere act of smiling will put people in a better, more receptive mood.

Head Nodding
Lightly nodding your head up and down when you listen to others speak signals active listening. People like other people who listen to them with interest. People who nod their heads during conversations are perceived as good listeners and are viewed in a good light.

Common Ground
The fastest way to establish rapport with someone is to find common ground with the other person. When you enter the interviewer’s office, quickly scan the office for items that represent areas of shared interest.

Many people who go into job interviews are nervous because their future is at stake. In a nervous state people often do not display the same friendship signals that come naturally, almost subconsciously, when they are less apprehensive. Knowing what the friendship signals are will help job seekers monitor their behaviors to let them know if they are sending the right signals. Following these few simple techniques will help job seekers create good first impressions and get the job interviewer to like them even before the actual job interview begins. 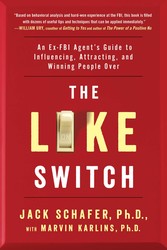 The Like Switch: An Ex-FBI Agent’s Guide to Influencing, Attracting, and Winning People Over
by Jack Schafer with Marvin Karlins

From a former FBI Special Agent specializing in behavior analysis and recruiting spies comes a handbook filled with his proven strategies on how to instantly read people and influence how they perceive you, so you can easily turn on the like switch. The Like Switch is packed with all the tools you need for turning strangers into friends, whether you are on a sales call, a first date, or a job interview.