Many of us struggle to extinguish anger and resentment after a layoff. Alice was traumatized after losing the job she’d held for nearly 20 years. Mary Hayes Grieco, author of Unconditional Forgiveness: A Simple and Proven Method to Forgive Everyone and Everything , shares how Alice learned to forgive the man who laid her off and move on.

I worked with a woman named Alice who needed to forgive a man in charge of a large downsizing and restructuring in the health care corporation that she worked for. She worked as a doctor in a family practice clinic that had enjoyed very little staff turnover for nearly twenty years. Alice loved going to work every day, and she served some of the same families for years and years—she knew she was valuable and trusted. Alice loved the warm, productive hum of that stable and cooperative work group: they were accustomed to each other’s needs and rhythms and attentive to each other’s well-being and life passages. It was that rare treasure in the world of employment—a satisfying job and a fine working unit that cared about its members. It fulfilled her need to be part of a meaningful community, every day.

Although the clinic was stable and well organized, economic times were hard and the clinic was not exempt from the HMO’s top-down mandate to cut expenses by 35 percent, ASAP. The executives hired a “hatchet man” to carry out the unpleasant task. A tiny man, drunk with power, Ed was fresh from a previous job in which he had felt disrespected. He seemed intoxicated with the authority he was given in his new job, and so he threw his weight around willfully, almost gleefully ignoring the personal human element in all that he did. He made generalized, hardline decisions that literally destroyed the caring culture of the medical clinic, which had been in place for nearly two decades. He ignored suggestions from experienced managers and swept positions away without careful thought. He let experienced people go instead of attempting to reposition them, losing the value of their experience in the new situation.

Ed used the classic “pink slip” approach. In the middle of the clinic day, he informed health workers—including Alice—that he was letting them go, now, and told them to clean out their desks while a security guard stood by to prevent them from stealing anything. Then the guard escorted these dedicated, responsible people outside, leaving them shocked, humiliated, and suddenly bereft of their jobs and their work community. They weren’t even allowed, legally, to say good-bye to long-term patients. “It isn’t personal,” Ed said to fine clinicians who had brought their hearts to their work for years. The way Ed carried out this downsizing and restructuring hurt so many people, and it could have been so different if he’d had more wisdom. Even though the clinic remained where it was and continued to operate, it lost its “center” as an organization and as never the same. Two years after this teardown occurred, Ed was fired and moved along. Alice felt that he left in his wake a ruined, broken shell of what the clinic had been before.

Ten years after Ed rudely rushed her out of her job, Alice still carried the hurt of that cruel loss in her heart. She felt like she had witnessed a happy village being mowed down by vicious mercenaries, and she grieved the loss of the wholeness that she had known in her work life back then. She moved on into two other jobs that were OK, but she still walked around in a mild depression after that job loss. Alice came to see me because she was ready for a change and knew intuitively that she could not create something truly satisfying again until she forgave the experience of losing the job where she had been so happy. She found relief by letting go of two big expectations: (1) that her former superior was wise and mature and would conduct the restructuring in a caring and respectful way, and (2) that the happy era she had known at the clinic could have continued into the present day. When she got through this issue, she was at peace. Although she would always believe that Ed’s leadership was flawed and his actions were wrong, she let the sad story go and was ready to start fresh with her goal to create a satisfying work life again. 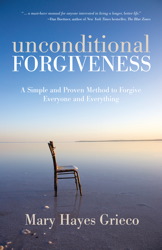 Forgiveness is about more than just letting go. It’s about healing wounds and wiping away scars. It’s about feeling better—physically and emotionally. It’s about living your life with purpose and truly moving forward.In Unconditional Forgiveness, Mary Hayes Grieco offers the Eight Steps to Freedom, a simple, effective eight-step program that teaches readers how to completely forgive in order to achieve both emotional and physical well-being. This step-by-step method incorporates emotional, energetic, and spiritual components that are accessible to everyone and offer lasting success. The Eight Steps to Freedom are: Step One: Use Your WillDeclare your intention through the power of will to begin the process of forgiveness. Step Two: Express Your Emotional PainYou are given complete freedom to express your honest emotions without judgment or fear. Step Three: Release Expectations from Your MindIdentify and let go of the expectations you had surrounding the person or situation that you are forgiving. Step Four: Restore Your BoundariesFirmly separate yourself from the harmful actions and attitudes of the other person or situation. Step Five: Open Up to Getting Your Needs Met in a Different WayEmotions have been released, expectations have been let go, and you no longer demand anything from the person or situation that you are forgiving. Step 6: Receive Healing Energy from SpiritReach to a higher level, bringing unconditional love and light into your being. Step Seven: Send Unconditional Love to the Other Person or Situation and ReleaseUnconditional love and light is freely given to the person or situation you are forgiving. Step Eight: See the Good in the Person or SituationNow that you are free from the past pain and grievance, recognize the good that can be taken from the person or situation. Grieco walks the reader through each step and addresses the entire spectrum of painful issues, from the everyday mundane to the most difficult, as well as providing a way to forgive one’s self, when necessary. The how to appendix provides a perennial, off-the-shelf reference to swiftly guide readers through the process whenever the need arises. With Grieco’s in-depth yet simple program, your healing can be as swift as it is lasting.