Disagreements with coworkers and bosses are inevitable. There’s so many different opinions and ideas bouncing around that it can often be easy to get under someone’s skin. Lea Berman and Jeremy Bernard, authors of TREATING PEOPLE WELL, explain how to reduce drama in the workplace.

Drama begets drama. Here are some ways to reduce theatrics in work environments or social settings:

Try to keep people away from the volatile situations and subjects that set them off. If a holiday volunteer hyperventilated each time she saw the president or first lady, we would assign her to be anywhere except near them. If you know your best friend has a pet peeve about being kept waiting, don’t be late. If someone likes stirring the pot and can’t respect opinions that differ from his own, think carefully about including him in gatherings with people of varied views.

Nip hysteria in the bud.

Some people carry drama with them wherever they go. Ignoring the histrionics is like depriving a fire of oxygen. Rumors also breed drama, so knock them down as swiftly as possible; this gives gossips nowhere to go, and keeps your reaction from becoming part of the story.

Take what people are saying at face value and act on the facts you know, not the emotions you may feel. Anyone feeding into a conflict by spreading inaccurate information or getting worked up is only making things worse.

There’s a saying that applies particularly well in Washington: “Always keep your words soft and sweet, in case you have to eat them.” Whenever you find yourself in a charged situation, try to deliver your comments in a positive—or at least neutral—tone. There will probably be a few times when you wish you had voiced your anger more forcefully, but more often we wish we’d said less.

Go to the source.

One of the first lessons we learned at the White House was to make sure we were acting on accurate information rather than relying on hearsay. Occasionally an acquaintance of the first lady would call and say, “The first lady told me to tell you to invite my brother-in-law/secretary/high school basketball team/hair stylist to a party. Here’s their address and phone number.” They hoped we would be too busy to check, but as Ronald Reagan said in his talks with Mikhail Gorbachev, “Trust, but verify.”

Discover more ways on how to succeed in the workplace and life in TREAT PEOPLE WELL by Lea Berman and Jeremy Bernard.

Tips on Life & Love: 6 Suggestions for How to Act Decisively

Excerpted from Treat People Well by Lea Berman and Jeremy Bernard. Copyright © 2018 by the author. Used by permission of the publisher. All rights reserved.

Photo by Lauren Mancke on Unsplash. 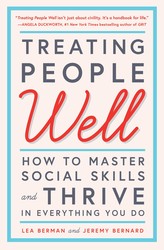 Two White House Social Secretaries offer “an essential guide for getting along and getting ahead in our world today…by treating others with civility and respect. Full of life lessons that are both timely and timeless, this is a book that will be devoured, bookmarked, and read over and over again” (John McCain, United States Senator).Former White House social secretaries Lea Berman, who worked for Laura and George Bush, and Jeremy Bernard, who worked for Michelle and Barack Obama, have learned valuable lessons about how to work with people from different walks of life. In Treating People Well, they share tips and advice from their own moments with celebrities, foreign leaders, and that most unpredictable of animals—the American politician. Valuable “guidance for finding success in both personal and professional relationships and navigating social settings with grace” (BookPage), this is not a book about old school etiquette. Berman and Bernard explain the things we all want to know, like how to walk into a roomful of strangers and make friends, what to do about a colleague who makes you dread work each day, and how to navigate the sometimes-treacherous waters of social media. Weaving “practical guidance into entertaining behind-the-scenes moments…their unique and rewarding insider’s view” (Publishers Weekly) provides tantalizing insights into the character of the first ladies and presidents they served, proving that social skills are learned behavior that anyone can acquire. Ultimately, “this warm and gracious little book treats readers well, entertaining them with stories of close calls, ruffled feathers, and comic misunderstandings as the White House each day attempts to carry through its social life” (The Wall Street Journal).