Your career should give you a sense of personal and emotional satisfaction in your life. You should want to help others and do good for the world and others through what you decide to do with your life. Erica Williams Simon, author of YOU DESERVE THE TRUTH, shares 3 ways you can use your job to help others.

Don’t for a second think that you do not have what it takes for your work to matter or that the work of Professional Do-Gooders is more valuable than yours. It isn’t. Even they know that. That’s why they spend the bulk of their time developing strategies to reach and engage you. The truth is, it’s the Everyone Else who changes tides and makes dramatic impact. Have you ever stopped to consider the role of Everyone Else in social movements? The fight for minimum wage is being led by actual minimum wage workers. You know whose voices matter most in debates about education reform? Parents’. When people take to the streets to protest police brutality, it’s not full-time activists leading the way—it’s the families of victims and those who live in the community who are most impacted. So no matter who you are, no matter what your profession, changing the world is work that you are qualified for.

And there are many, many ways that you can do it.

As consumers and employees, millennials are changing the job market dramatically by demanding more from their employers, encouraging corporate social responsibility, organizing groups within their organization, coordinating employee fund-raising or volunteer activities. Imagine what would happen if every single job in America included pro-social activities in the scope of its work? You can be on the front lines of making that happen right where you are.

#2. Make your skills work for change.

Work that uses your skills and brings you joy either at your job or at home can always be used in some way for social good. Do you like to cook? Make meals for protesters or volunteers. Do you enjoy writing? Volunteer to write copy for a local organization. Are you tech savvy? Or a great public speaker? Or an event planner? Or a bookkeeper? Trust me. Someone, somewhere, can use your skills.

Think of how your efforts in other areas of your life can be reflections of your values and the causes that you care about. How do the places that you spend your money, the food that you eat, what you teach your children allow you to make the change you want to see in the world? This is not about being perfect, sounding politically correct, or performing “wokeness.” It’s about working how you can, when you can.

Discover more ways to do good for the world around you in YOU DESERVE THE TRUTH by Erica Williams Simon!

Excerpted from You Deserve the Truth by Erica Williams Simon. Copyright © 2019 by the author. Used by permission of the publisher. All rights reserved. 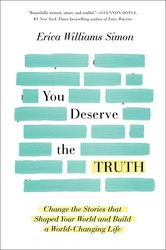 You Deserve the Truth
by Erica Williams Simon

Behind the social media smiles, many people in their twenties and thirties are living frustrating lives: overwhelmed and exhausted by the gap between their realities and the image they are expected to project to the world. Erica Williams Simon recognized that this generational malaise was a recipe for disaster, one that she was experiencing firsthand.

At twenty-seven, she abruptly walked away from a high profile career as a rising political media star. She stepped off the “treadmill to nowhere” to find her own truth, unpacking the advice and cultural norms that had shaped her life as she knew it. Along the way she became “story smart,” was finally able to reject the lies that society had taught her, and rewrote a brand new values-driven narrative that has helped her create a life worth living.

You Deserve the Truth is a masterclass in how to challenge the stories surrounding fear, work, money, identity, success, faith, and love that millions have unconsciously adopted. Each chapter includes the heroic and heartbreaking lessons learned from Erica’s journey and during her tenure inside the highest levels of politics, media, and tech.

Part memoir, part self-help, You Deserve the Truth provides a blueprint for anyone seeking a new way to live; one that is authentic, empowered, and ultimately world changing.