First impressions are important, especially when it comes to your career Akbar Gbajabiamila, author of EVERYONE CAN BE A NINJA, shares his 3 tips to introducing yourself in the business world.

Some people are shy. But even if I was more or less born with this skill, I also honed it in Food from the ’Hood, when we would travel to expos to meet new clients. We had to learn to be fearless in approaching strangers and making our sales pitch. I have carried this skill with me ever since. I remember when I was at SDSU and I saw the university president walking across the campus. I sprinted to catch up to him and introduce myself. We had a great conversation, but when I returned to the locker room, my teammates were awestruck. “Did you just talk to the president?” they asked, as if it was the most courageous thing someone had ever done. But to me, it was a moment of opportunity. There he was—why wouldn’t I talk to him? But you might be different. If the thought of approaching a potential mentor terrifies you, then try some of these tactics:

When I meet someone for the first time, I talk about my love of travel and that I’ve been to forty countries. This immediately gets us talking about our shared interests and acts as a great icebreaker.

Have an active conversation. Do some homework about your potential mentor and ask relevant questions that engage them and enlighten you

Once you’ve established a rapport with someone, you should let them know what you need help with. Tell them where you’re struggling and ask what they think you should do.

As one of seven siblings, I learned that closed mouths don’t get fed. Open your mouth. Talk. Ask. I guarantee someone will reach out their hand.

Find out how to succeed in business in EVERYONE CAN BE A NINJA by Akbar Gbajabiamila!

Tips on Life & Love: Motivate Yourself: Productivity Starts at Your Desk

Excerpted fromEVERYONE CAN BE A NINJA by Akbar Gbajabiamila. Copyright © 2019 by the author. Used by permission of the publisher. All rights reserved. 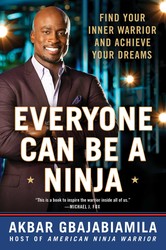 Everyone Can Be a Ninja
by Akbar Gbajabiamila

The beloved host of the NBC hit show American Ninja Warrior draws inspiration from both the fierce competitors on his show and his own unlikely path to success to outline the essential steps to achieving your goals and becoming a modern-day ninja.

Akbar Gbajabiamila, the host of NBC’s hit Emmy-nominated show, American Ninja Warrior, did not have an easy path to success. One of seven children by Nigerian immigrant parents, he grew up in the Crenshaw district of South Central Los Angeles during the 1980s and ’90s, a time when the neighborhood was fraught with riots and gang violence. With dreams of playing professional basketball, Gbajabiamila found success not in the sport he loved, but in football. Late in his high school career, Gbajabiamila suited up with pads for the first time and was thrown into the complex sport of football. He climbed major hurdles to play college football and then professional football. After playing in the NFL, it was only after years of hard work behind-the-scenes in radio and television that he was offered the job to be the host of American Ninja Warrior.

Through his own inspirational underdog stories and interviews with modern-day ninjas who have accomplished extraordinary things in their own lives against the odds, Akbar proves in Everyone Can Be a Ninja that it doesn’t matter if you make it through every step of the obstacle course on the first try. Ninjas keep pushing themselves until they reach their goals, and they don’t let anyone or anything stand in their way.

It is easy to see greatness in others; it’s hard to see it in ourselves. Everyone Can Be a Ninja shows you that we can fulfill our potential and achieve our dreams by finding our inner warriors.