In one study, 40 percent of Generation Me’ers (20 and 30-somethings) believed they should be promoted every two years, no matter what their performance. Here’s why you might consider creating more rungs on the ladder of career advancement, so promotions occur more often–for the young people who actually deserve them, of course. From Generation Me.

Many companies want to hire ambitious young employees—and they should. But managers also don’t want to be stuck with employees who are overconfident and entitled. It’s sometimes difficult to distinguish the two, especially in a brief job interview. Management professor Paul Harvey suggests asking job candidates, “Do you feel you are generally superior to your coworkers/classmates, and if so, why?” If the candidate says yes but struggles to explain why—or offers vague reasons—that might indicate entitlement.

In the spoof Millennials training video, a young worker does “what was asked of her—nothing more, nothing less. She expects a raise and a promotion,” explains the narrator. The young woman hands her report to the manager and waits. “Thanks…,” says the manager, and pauses, remembering her “training.” She then finishes, “Thanks, junior executive manager of data consulting!” The young employee smiles excitedly. “Is that better than assistant manager of junior accounts? Thank you! I’m going to go call my parents!”

Silly, yes, but a good idea is embedded here. Instead of having promotions and title changes every three to five years, some companies now add more levels that can be achieved in six months to a year. For a generation raised on “everyone gets a trophy” and instant gratification, more promotions at a faster pace is attractive. If the promotions are given for outstanding performance, not just showing up, having more steps on the ladder has no real downside, so it’s a win-win.

Even in a company with faster promotions, however, it’s unlikely that the new hire will be CEO in five years—and he or she needs to know that. Sometimes it’s helpful for a young employee with a few years of experience to explain the usual career paths to new hires. Aiming high is good, but they also need to know that they will not start at the top.

For GenMe: I am not suggesting you become less ambitious, just more clear-eyed. Keep thinking about how to do things better, and keeping thinking about how you can get ahead. Just don’t expect it to happen overnight. Tim Urban, whose piece on “Why Generation Y Yuppies Are Unhappy” went viral online, gives this advice: “Stop thinking you’re special. The fact is, right now, you’re not special. You’re another completely inexperienced young person who doesn’t have all that much to offer yet. You can become special by working really hard for a long time.” I’d go a little less extreme—you can make a contribution in your job right now, and you can keep working toward your goals. But Urban is right that building a career takes time. For all but the lucky few, it does not happen overnight. And that’s okay—especially if you like what you do, getting there can be the fun part. 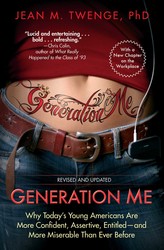