It takes a lot of faith and heart for someone to quit their job and start from scratch. Clint Harp, the carpenter in Fixer Upper and author of the book HANDCRAFTED, did precisely this when he decided to take his shot in carpentry with the help of HGTV’s Chip Gaines. It was pure luck that these two men crossed paths and were able to begin handcrafting their new careers.

As soon as I made the connection, I went right back into dumpster-fire mode, reprising that awful voicemail. “No way!” I said. “Wow! That’s crazy, ’cause I was just sitting there in my car wondering what in the world my next step is, ’cause you see, I quit my job a few months back and I was thinking that I could build some tables, but nothing is happening, and . . .”

Chip stopped me so he could ask some questions and fill in a few gaps, and probably also to shut me up. For years, he told me, he and his wife, Joanna, had also been building their own company, flipping houses and selling home goods. “I’ll tell you what,” he said after a couple of minutes of small talk, “why don’t you drop your family off at home and then stop by my shop and maybe we can chat some more?”

We didn’t know each other at all, but somehow, that afternoon, we ended up driving around Waco for three hours just talking. He showed me some projects he and his wife were working on. I told him about quitting my job. He told me about their new development. I explained I was volunteering with Habitat for Humanity. He said that they had four kids. At the time, we had two. He built houses. I wanted to build furniture. On top of being an interior designer, his wife had been selling the home goods she curated to anyone who’d buy them, and she was hoping to add a furniture line. Kelly was pursuing her master’s but had previously designed baby clothes and home goods and had a great eye for home décor. They didn’t quite know where their lives were headed. Neither did we.

Chip suggested that our family come over for dinner, and a few nights later, we did. We knocked on their door and sat down together for a spaghetti meal while our kids ate and played in the back. Around that table, the four of us just dreamed aloud together, and throughout the evening, Chip popped in with, “You know, I feel like there could be something more here.” More sounded good, more of anything. More food? Yes, please. More conversation, more time, more planning? Absolutely. That evening, Joanna asked me, “Clint, do you think if I drew up some designs on a piece of paper, you could possibly build them?” I had no shop. I had no lumber. I had some tools, but they were in storage. I’d built a few tables and one bed, for which I’d earned zero dollars. I had a lathe, but didn’t know how to use it—not yet, anyway. I really had little to offer. “You bet, Jo,” I told her. “I’m all in.”

It would’ve been completely understandable for Kelly to shoot me a glance that meant “Say no, Clint! This girl clearly knows what she’s doing and you definitely do not!” But Kelly didn’t say a word. From across the table, she just looked at me like “Yeah, do it. I know you can.” I still can’t believe I bumped into Chip, a guy who had no idea he was about to get his own TV show in less than a year from that day at the gas station. Some might call it providence, luck, serendipity, or even destiny. I’m not quite sure what to call it, but I do know this: what followed was as much a beginning as it was another step in the wild ride I’d been on for decades.

To learn more about Clint’s journey into becoming a carpenter on HGTV’s Fixer Upper, check out HANDCRAFTED by Clint Harp

Tips on Life & Love: How to Set a Gorgeous Table

Excerpted from Handcrafted by Clint Harp. Copyright © 2018 by the author. Used by permission of the publisher. All rights reserved.

Photo by Michael Mroczek on Unsplash 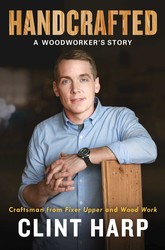 Clint Harp, maverick carpenter on HGTV’s smash hit Fixer Upper and the star of Wood Work on the DIY Network, presents his inspirational memoir that celebrates meaningful work, turning your craft into a career, and recognizing the importance of the journey itself. Spanning Clint’s remarkable journey—from a childhood learning carpentry and hard work at his grandfather’s knee, through his struggles to balance pursuing his dreams with supporting his family, to his partnership with Chip and Joanna Gaines and the many adventures and misadventures of filming Fixer Upper—Handcrafted is part memoir and part manual for dreamers.