Has an internal voice or sudden impulse ever told you to call the doctor, not get on an airplane, or take a specific job–and you later came to realize that it was, in fact, the best decision you ever made? That’s intuition! It’s a sixth sense, a sense of “knowing” from within. From You Can’t Make This Stuff Up: Life-Changing Lessons from Heaven.

Intuition isn’t unpredictable and it doesn’t occur randomly; it’s deliberate and divine guidance. You also have free will, so you can choose not to listen to these signals and do your own thing instead. But if you want the most fulfilling life you can have, listening to your intuition is a good way to avoid feeling stuck or overwhelmed with negativity. Spirit’s guidance only wants you to live well.

Intuition comes from Spirit, including guides, angels, loved ones, and God. In addition to a sense of knowing, I can often tell who’s communicating with me by the images Spirit flashes in my mind; they’re like the holograms on Star Trek or at a Tupac or Michael Jackson concert! I don’t expect this happens when you get a hunch, unless you’re psychic, but I’ll touch on what I experience just in case.

I was taught that our guides, which can include angels, provide us with most intuition, instinct, coincidence, random or fleeting feelings, and intervention in times of danger. So I’ll see angel wings when a feeling comes from my angel guide Solerna. If it’s from my other main guide that I call Chief, I’ll see an Indian headdress. If I get direction from a loved one, I might see an image from an old photo or just their head or torso. When I’m guided by God, I see white light and His energy feels calming, serious, and the highest of any I channel. He’s way beyond holograms!

The other thing about intuition is that it’s never wrong, though it may take you in a roundabout direction to where you’re meant to end up. I have a client named Alison who, years ago, was at a crossroads about who she should marry. She felt she had a choice between two men, her boyfriend or a new guy she’d become very close to, and she admittedly felt her intuition pulling her toward the new flame. So she ended her old relationship to start over, but within weeks her evolving dynamic with this other guy made it obvious that she’d made a rash and poor decision. Their chemistry was only strong when their bond felt illicit, and they didn’t have as much in common as she’d thought. Alison went back to her boyfriend, rekindled their love, and they’ve been happily married ever since.

When Alison told me this story, she was confused about Spirit’s guidance in it. Did her intuition screw up and send her down the wrong path? No way. Spirit actually showed me that Alison is the type of person who needs firsthand experience to know when she makes the right decisions; she likes proof. Without it in her relationship, she would have always wondered about being with that other guy. So Alison’s gut instinct didn’t misguide her; Spirit just gave her the guided tour to where she was supposed to be all along. It’s interesting too, because Spirit told me that this kind of indirect guidance is similar to what they give you when you follow your instincts to choosing different medical treatments that ultimately don’t save a person’s life. Similar to Alison’s situation, Spirit knows when you need to feel you did everything you could do, even when nothing could be done.

Guidance isn’t always obvious, but if it were, you’d never have to intuitively search for meaning and, thus, learn many lessons. In fact, misfortunes like suffering, tragedy, and sickness are especially linked to soul growth, because they force you to lean hard on what you feel instead of what you think you know. And if you could predict guidance’s outcome with certainty, Spirit also knows you’d never feel the rush of a pleasant surprise, and what fun is that? For example, if you feel drawn to buy a Lottery ticket at the local 7-Eleven, this doesn’t mean you’ll hit the jackpot. You could bump into an old friend, grab a drink, and reconnect in a great way. Or, on the other hand, you might be like my friend Lauren, who was at 7-Eleven when my face came into her head. She took it as a lucky sign, bought a scratch-off, and I’ll be damned—she won five hundred dollars! Forget a rabbit’s foot; you should put my face on a keychain. And though these similar scenarios have different outcomes, intuition pulls through for both. 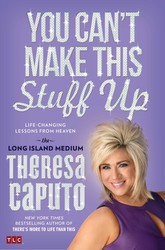 You Can’t Make This Stuff Up: Life-Changing Lessons from Heaven
by Theresa Caputo

For fans of TLC’s Long Island Medium and anyone interested in the big questions of life, death, and finding out what’s important in between, New York Times bestselling author and medium Theresa Caputo shares the insights and lessons she’s learned through her exceptional gift of communicating with the dead. In You Can’t Make This Stuff Up,Theresa imparts the life-changing wisdom she’s received from Spirit and client readings.Each chapter incorporates a powerful lesson that is made real by Theresa’s witty and wise insights.