People nowadays aren’t just getting older— they’re also living longer. Learn how to keep your mind resilient, so you can live a long, and happy life. From Make Your Brain Smarter: Increase Your Brain’s Creativity, Energy, and Focus.

Fact: We are outliving our brains. Life expectancy in the United States today is about 80 years old. Girls have a one in three chance of living to 100, while boys have one in four. The problem? Our cognitive brain performance peaks in our early 40s. That means mental functions like memory, speed of thinking, problem-solving, reasoning, and decision-making decline in the last 30 or 40 years of life.

The truth is most people don’t consider their brain health until they’re faced with injury, disease, or simply getting old. But just as we’ve come to realize that we can improve our physical health through diet and exercise, we can improve our cognitive health too. It’s simply a matter of engaging in the right mental workouts.

Science now strongly supports the fact that our brains are one of the most modifiable parts of our whole body. Our brains actually adapt from moment to moment, depending on how we use them; they either decline or improve, and which direction they go depends on us and the way we challenge them.

Our research team at the Center for BrainHealth at The University of Texas at Dallas is working on how to improve brain performance at all ages, and our findings show that making our brains stronger, healthier, and more productive requires actually changing the way we use them every single day. And that’s where where daily changes come in. We all must first abandon toxic habits that are depleting brain resources, and also incorporate complex thinking into our daily routines. Ready to make your brain smarter? Here are a few scientifically proven ways to do it.

Quiet Your Mind
“Don’t make any rash decisions!” Somewhere along the line, we’ve all been given that advice, and it actually applies to your brain too, which can often better solve complex problems when you step away to reflect on ideas and crucial decisions rather than acting without weighing choices. A halt in constant thinking slows your mind’s rhythms, allowing it to refresh. Employ a “Five by Five” principle where you take a break from whatever you’re doing five times a day for at least five minutes to reset your brain. When we let our brain work behind the scenes, we have our best “aha” moments. And don’t we all want more of those?

Translate Your World
Move away from surface-level, uninspired thinking and eschew predictable thoughts by pushing past the obvious and really think. For example, when asked what a movie was about, most people would give a play-by-play of events that occurred. To boost brainpower, instead think of the major themes of the film and relate it to personal situations in your own life and how they apply. Think back on one of your favorite movies or books from the past year and generate five to eight different take-home messages you can glean from it.

This process, called synthesized thinking, strengthens the connections between different areas of our brains. Our brains actually become quickly jaded by routine since they were built to dynamically shift between details and the big picture. They also hate information downloading, so it helps to think like a reporter. When taking in large amounts of information, try to explain it in a few sentences. Kick off meetings with provocative big ideas. Power your important email messages with simple but thought-evoking subject lines.

Stop Multi-tasking
We are inundated with more and more tasks every day. Relentless simultaneous input and output fatigues the brain and reduces productivity and efficiency. You may think that by doing two or three things at once – like participating in a conference call while writing a couple of emails – you are moving faster through your day. But nothing could be further from the truth. Our to-do lists keep getting longer while performance and accuracy slip. So, when working on higher-order thinking tasks that matter, allow your focus to be completely uninterrupted for at least 15 minutes at a time and then gradually increase the length of those intervals.

Move Your Feet
Recently published research shows that aerobic exercise stimulates positive brain change and memory gains faster than we previously thought possible. Adding regular aerobic exercise that elevates your heart rate to your routine at least three times a week for an hour won’t just help with physical health, it will also increase brain blood flow to key memory centers in the brain and improve our memory for facts. When you combine complex thinking with aerobic exercise, brain health benefits are amplified.

Until recently, we thought that cognitive decline was an inevitable part of getting old, but the good news is that’s officially not the case. Toxic habits and a life on autopilot are key culprits for unnecessary cognitive decline. Our research has shown that healthy adults who use these strategies can regain lost cognitive performance, improve blood flow in the brain, speed up communication between its regions and expand its structural connections. And you can actually evoke some of these positive changes in a matter of hours. Adopting this new, healthier way of thinking translates into real-life benefits that support our ability to make decisions, think critically, reason and plan. In other words, shaping your brain by engaging in the right kind of daily mental exercise has the power to reverse brain aging and actually make you smarter. So boost your brainpower! You have nothing to lose. 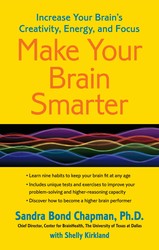