Why do women sabotage each other, personally and professionally? In my consulting and coaching engagements, and from listening to hundreds of women of all ages, I have identified a polarization that I’ve shared in Brave Girls.

On one end of the spectrum lie women who are highly invested in aligning with and advancing other females; on the opposite side are those who alienate other women, dismiss the importance of women’s initiatives and associations, and openly state that gender equality is irrelevant. The former group—those who engage with other women—typically demonstrate integrated power, according to my model. They act with self-awareness, insight, authenticity, and in accordance with their values while simultaneously collaborating and recognizing the importance of teamwork both in and out of the office. These are the women who champion new ideas, feel comfortable socializing and working with others who surpass their expertise and skill, and bask in satisfaction stemming from others’ happiness and success. Externally, these women exude confidence, are centered, and take accountability without becoming defensive; they can showcase their strengths and report feeling connected, optimistic, and energized.

Those that hover on the other end of the spectrum, however, exhibit just the opposite. Women who are judgmental, undermine and sabotage others, and gain satisfaction from others’ duress or failure typically lack power and suffer from low self-esteem. One of my theories is that women who tend to rigidly evaluate others are usually equally self-critical. How can they applaud and recognize the efforts of another woman when they fail to see the positive aspects of themselves?

What is so disheartening about relational aggression is that it perpetuates the image that women are weak, unable to manage others, or “too emotional.” These “mean girl, all grown-up” behaviors are highly visible, causing conflict and stress among others. Men refer to conflicts among women as “catfights” and are both fascinated and frightened by the friction that plays out, leaving them hesitant to hire and promote female candidates, fearing emotions will pervade and disrupt the office. Relational aggression not only damages those entangled in the power play, it indirectly reverses progress, setting women back a few notches.

When women use relationships as weapons and enlist others in their fight, they are no better than the eighth-grade bully hell-bent on threatening and harassing other girls. It is exactly the same phenomenon, only the stakes are larger because it slows advancements in gender equality. The conundrum is that relationships are so essential to women, biologically, socially, and emotionally, yet sabotaging them is the first recourse of females who feel rejected, threatened, or hurt. Sisterhood is not a luxury—it is a necessity. Same-sex friendships provide emotional support in life and at work; feeling connected to a group offers the opportunity to feel validated and experience a sense of belonging, understanding, and appreciation. Consciously or unconsciously, women partake in similar activities: rallying and organizing around family, community, religion, or social issues they care about or even working for the same company. Being female is the one commonality that levels the playing field. If women continue to perpetuate this “mean girl, all grown-up” phenomenon, the consequences are huge: they thwart gender reformation, they provide a negative role model for younger generations, and they perpetuate stereotypes. 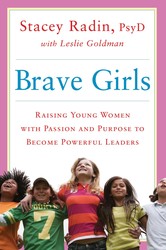 An empowering guide to cultivating confident, passionate, and powerful young leaders during the most formative stage of life: the middle school years.After years of research as a psychologist and consultant for women struggling in the professional world, Stacey Radin made a groundbreaking realization: it all begins in middle school.

Women who become successful leaders learn how to do so in the middle grades—the most formative stage in a girl’s development and self-identification.

Drawing on her own experience with Unleashed, an after-school program dedicated to empowering girls through puppy rescue, Radin has written Brave Girls­—the ultimate guidebook for parents and educators who want to learn how to help their girls become confident, passionate, and powerful leaders.