The irony of staying constantly connected through modern technology is that it often renders us disconnected, since we give nothing our full attention. Find out more about this new disorder (if you keep reading!) and its negative effects on our daily lives. From The Four Virtues.

Linda Stone, a former Apple and Microsoft executive, addressed her audience at a Silicon Valley computer conference. A majority of the people in the crowd looked down at their laps as she was speaking rather than at her. They were working on their handheld devices, checking email, and text messaging; some were probably writing snarky comments about the speaker on Twitter or a blog, and who knows what else.

She got their attention when she named a new “disorder”: Continuous Partial Attention, or CPA. The demanding quality of the internet and constant virtual stimulation distorts life into rapidly changing sound bites, image bites, and data bytes. This steady pull on our attention can inhibit us from being able to give anything or anyone our full, undivided attention. It may also engender a sense of constant crisis. We are always on the lookout, always ready to respond with a tap on a keypad or the swish of a finger. Our attention and our mind are here and there and everywhere, constantly interrupting itself and always on its way to somewhere else. No wonder energy drinks, coffee franchises, and anti-anxiety medications have been doing so well. In this race, the goal isn’t to get somewhere; it’s just to try to keep up and react.

Splintering our attention with multitasking and jumping to the next call, text message, or sales pitch has become increasingly the norm. To be sure, some situations really benefit from multitasking, and for some, it provides welcome stimulation. And there are a few advantages to functioning as live electronic nodes constantly plugged into the World Wide Web. But there are downsides, too. Like a dog whose attention is instantly captured by the squirrel bounding by, we can be taken for a fruitless run by anything and everything. Talking to people with CPA is like talking to someone at a cocktail party who is constantly on the lookout for the next, presumably better conversation. The conversation doesn’t get very far before their eye catches the next more interesting mark, and they’re off (the “squirrel!” reaction). The result is that continuous availability and response actually inhibits any ability to really meet others deeply and give them our undivided attention.

In this sense, constantly being accessible—a node on the information superhighway—can ultimately make us profoundly inaccessible. 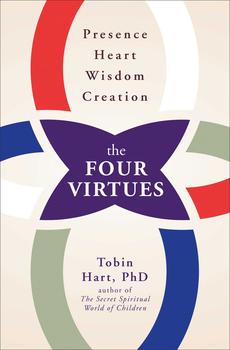 By drawing from across tradition and time, from neuroscience to ancient wisdom, Tobin Hart reveals that we all possess four essential virtues—Presence, Heart, Wisdom, Creation—that help us to build, balance, and integrate our psychological and spiritual life on earth.