Living abroad can be one of the most rewarding experiences of your life. By making your home in a new country, even temporarily, you gain a sense of adventure, build confidence, and most importantly, learn more about yourself. Kristin Harmel, author of THE ROOM ON RUE AMELIE, shares why you should leave your comfort zone and explore a city abroad.

Have the chance to spend a few months or more in another country? Don’t hesitate: grab your passport and go. Spending an extended period living abroad can change more than just your location; it can change your entire outlook on life. That’s what happened to me when I seized an out-of-the-blue opportunity to spend three months living in Paris (in a $600-a-month apartment a few blocks from the Eiffel Tower, no less!). It’s where I began writing my first novel—and it’s where I truly found myself for the first time, because I was able to see who I really was without the backdrop of the familiar.

Ruby Henderson Benoit, the main character of my new novel THE ROOM ON RUE AMELIE, has much the same experience when she follows her new husband, Marcel, from late-1930s New York to an apartment on Paris’s picturesque rue Amélie. Soon, World War II has engulfed the city, and Ruby finds courage and resilience where she least expects it—in her own heart.

Here’s what to do if you have the chance to live abroad:

Don’t go it alone. If you’re making the move for a job in another country, you’ll probably have a built-in social group in your new office once you get there. But if you’re making the move solo, like I did, ask your friends and acquaintances if they know people in your destination, and don’t be afraid to ask for introductions. You can also join social groups for ex-pats once you arrive.

Pack light. Don’t attempt to bring your entire life with you. Instead, pack as if you’re going on a two-week trip, focusing on layering-friendly, neutral clothing. Plan on acquiring other items (including inexpensive household basics) when you get there. The style in your new city will be different than in the one you left behind, and building a destination-friendly wardrobe should be doable, even on a budget, thanks to the proliferation of low-cost retailers such as Zara and H&M.

Learn the words you’ll need. When I moved to Paris, I barely spoke French; instead, I had minored in Spanish in college. So I hustled to learn the basics – words I would use in everyday interactions with strangers – and once I got there, I did my best to learn, and to explain to people (often with an apology) that I wasn’t very good at speaking their language. Being humble and demonstrating that you’re trying can go a long way.

Have a broad game plan. Landing in a new place can be daunting, especially if you’re not there for a job. So think of a few things you’d like to accomplish with your time. For me, it was writing a book. That goal gave purpose to my days and helped me to remember who I was.

But keep an open schedule – and an open mind. You may have some ideas of things you’d like to do while you’re overseas—for example, I wanted to take side trips to Germany, Switzerland, Italy, and the Netherlands—but try to leave yourself some free time for opportunities and plans that arise once you’re on the ground.

Above all, the best way to immerse yourself in a new life—and a new you—is to give yourself permission to go where your heart takes you. You might just be surprised at where you wind up.

Traveling on a budget? Check out these tips. 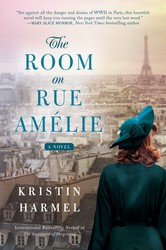 The Room on Rue Amélie
by Kristin Harmel

For fans of Kristin Hannah’s The Nightingale and Martha Hall Kelly’s Lilac Girls, this powerful novel of fate, resistance, and family—by the international bestselling author of The Sweetness of Forgetting and When We Meet Again—tells the tale of an American woman, a British RAF pilot, and a young Jewish teenager whose lives intersect in occupied Paris during the tumultuous days of World War II.When newlywed Ruby Henderson Benoit arrives in Paris in 1939 with her French husband Marcel, she imagines strolling arm in arm along the grand boulevards, awash in the golden afternoon light. But war is looming on the horizon, and as France falls to the Nazis, her marriage begins to splinter, too. Charlotte Dacher is eleven when the Germans roll into the French capital, their sinister swastika flags snapping in the breeze. After the Jewish restrictions take effect and Jews are ordered to wear the yellow star, Charlotte can’t imagine things getting much worse. But then the mass deportations begin, and her life is ripped forever apart. Thomas Clarke joins the British Royal Air Force to protect his country, but when his beloved mother dies in a German bombing during the waning days of the Blitz, he wonders if he’s really making a difference. Then he finds himself in Paris, in the shadow of the Eiffel Tower, and he discovers a new reason to keep fighting—and an unexpected road home. When fate brings them together, Ruby, Charlotte, and Thomas must summon the courage to defy the Nazis—and to open their own broken hearts—as they fight to survive. Rich with historical drama and emotional depth, this is an unforgettable story that will stay with you long after the final page is turned.