Welcome to San Francisco! It’s a heck of a wonderful town to visit or to live (and eat and drink) in, but if you are even a little bit familiar with the rich history of crime fiction set in the City By The Bay, you know that it’s also a very popular place to die… or more particularly, to be murdered!

From the Bay to the ocean, from the Golden Gate Bridge in the north to Hunters Point and Stern Grove in the south—and with hundreds of stops in between— the city provides an almost endless number of variations on the theme of locations ripe with the possibility of violent and unexpected death. With such a plethora from which to choose, picking the Top 5 spots to be murdered is a somewhat challenging task, especially considering that the near-constant fog in some seasons can in an instant transform any benign, even lovely street or park scene into a unidentifiable wasteland of shadow, whiteout, and mystery.

Your assailant might be standing in the open 30 feet away and you might never see him. Or her.

Until it’s too late.

But regardless of the weather, there are some places that simply reek with portent, where fear lies like a palpable miasma thick on the ground. In no particular order, these are my choices of the top five locations where, if you don’t want to dramatically increase your chances of becoming a murder statistic on your visit to San Francisco, you will want to avoid at all costs:

The Tenderloin District
Yes, a whole district of death! Turk, Eddy and Ellis streets between Taylor and Larkin. This is an area that you simply must not enter on foot, especially at night (although by day it’s not much better). And in fact, even if you’re driving it wouldn’t be a bad idea to choose an alternative route around these godforsaken few blocks, which feature street-corner drug deals by the score, ubiquitous alcoholism, prostitution, pickpockets, and residentially challenged people vying for prime begging turf. You can easily die here by accident, or be murdered here and have your killer make it look like one.

Coit Tower
This monument at the top of Telegraph Hill supplies one of the most beautiful views in the city. It is a great place to take in all the water surrounding San Francisco and the headlands beyond—Berkeley, Oakland, Alcatraz, Marin. However, in a more threatening vein, it appears and reappears time and again in scenes in Alfred Hitchcock’s Vertigo, giving it an iconic status as a place that inspires danger (even though it is not the tower which occurs in the movie’s final scenes—that honor goes to the bell tower at Mission San Juan Bautista). But when the fog is in (see above), the entire hilltop is as desolate and lonely a place as can be found in the city, and the perfect spot, as shown in my book The First Law, for an ambush or assignation gone horribly awry.

The Shakespeare Garden, Golden Gate Park
This giant jewel of a city park runs about halfway through the City from Stanyan Street all the way out to the Pacific, and contains any number of spots suitable for the nefarious dispatching of human beings. Although other locations in the park—Stow Lake, the Japanese Tea Garden, and either of the Dutch (North) or Murphy (South) windmills at the west end—would unquestionably rank highly as murder sites, I particularly like The Shakespeare Garden for its easy ingress and exit, as well as the mazelike quality in the heart of it. Here, even on a nice day, the unsuspecting visitor can wander in and have a hard time wandering out… or wander in and simply disappear forever.

Ocean Beach, under the Cliff House
Ocean Beach stretches all the way down to the City’s southern border, but the north end begins about where Point Lobos Avenue turns into The Great Highway at the Cliff House, one of the city’s legendary restaurants and attractions. The place is well named. The stretch of beach just under the cliff on which the restaurant sits is an ideal murder location for any number of reasons: in spite of its proximity to parking and a major tourist destination, it is hard to walk to and hence deserted most of the time; the crashing of the surf muffles any other sound as, for example, gunshots; huge rocks jut from the water’s edge, ensuring that sight lines on this small patch of the beach itself are minimal; a body dumped in the water here may very well be carried off by the tide and never discovered—both white sharks and crabs abound just offshore. And finally, here the likelihood of all-embracing (and concealing) fog is at its highest.

Edgewood Avenue, The Interior Park Belt
Nestled into the side of a hill rising out of the UCSF Medical Center, this red-brick, one-block long dead-end street is without a doubt one of the most beautiful and simultaneously unknown locales in San Francisco. Quiet and secluded, it ends at an all-but-unknown, tree-shrouded, bush-filled park that steeply falls off into a canyon of overgrown darkness. I used this serene block almost as a character in two of my books (The Mercy Rule and The Keeper) because it is just so unexpected as a place where something bad can occur. All appears to be as it should be: that is its appeal and its danger. Explore at your own risk. 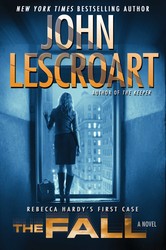 The Fall
by John Lescroart

From New York Times bestselling author John Lescroart, a riveting new novel of legal suspense featuring Dismas Hardy and his daughter, Rebecca, now grown up and an associate in Hardy’s law firm.Late one night, a teenage African American foster child named Tanya Morgan plummets to her death from the overpass above San Francisco’s Stockton tunnel. But did she fall…or was she pushed? With signature suspense and intricate plotting, The Fall puts Dismas Hardy and his only daughter in the middle of one of John Lescroart’s most complex and thrilling cases yet.