While we’ve always known that gardening can reduce stress, the activity has never felt more vital to our well-being than right now. Stuck at home for days and weeks on end for the sake of public health (not to mention our own) has led many of us to an even deeper appreciation for nature and growing plants. In this excerpt from her perfectly timed new book, THE WELL-GARDENED MIND, author Sue Stuart-Smith reflects on what it is about gardening that can be so very restorative.

I have come to understand that deep existential processes can be involved in creating and caring for a garden. So I find myself asking, How does gardening have its effects on us? How can it help us find or re-find our place in the world when we feel we have lost it? At this point in the twenty-first century, with rates of depression and anxiety and other mental disorders seemingly ever on the rise, and with a general way of life that is increasingly urbanized and technology-dependent, it seems more important than ever to understand the many ways in which mind and garden can interact.

Gardens have been recognized as restorative since ancient times. Today, gardening consistently features as one of the top ten most popular hobbies in a range of countries around the world. Quintessentially, caring for a garden is a nurturing activity, and for many people, along with having children and raising a family, the process of tending a plot is one of the most significant things in their lives. There are, of course, people for whom gardening feels like a chore and who would always prefer to do something else, but the combination of outdoor exercise and immersive activity is acknowledged by many as both calming and invigorating. Although other forms of green exercise and other kinds of mindful activity can have these benefits, the relationship that is formed with plants and the earth is unique to gardening. A close contact with nature affects us on different levels; sometimes we are filled with it, fully present and conscious of its effects, but it also works on us slowly and subconsciously in a way that can be particularly helpful for people suffering from trauma, illness, and loss.

The poet William Wordsworth explored perhaps more intensely than anyone else the influence of nature on the inner life of the mind. He was psychologically prescient, and his ability to tune in to the subconscious means he is sometimes regarded as a forerunner of psychoanalytic thinking. In a leap of intuition, which modern neuroscience confirms, he understood that our sense impressions are not passively recorded; instead we construct experience even as we are undergoing it, so that, as he put it, we “half-create” as well as perceive the world around us. Nature animates the mind, and the mind, in turn, animates nature. Wordsworth believed that a living relationship with nature like this is a source of strength that can help foster the healthy growth of the mind. He also understood what it means to be a gardener.

Much as I had felt uprooted, and the creation of our garden was existentially stabilizing for me, the process of making a garden together was an important act of restitution for Wordsworth and his sister, Dorothy. It was a response to the loss of their parents, who had died when they were children, leaving them to endure a lengthy and painful separation from each other. Gardening helped them recover a sense of home. At Dove Cottage they cultivated vegetables, medicinal herbs, and other useful plants, but much of the plot was highly naturalistic and sloped steeply up the hillside. This little “nook of mountain-ground,” as Wordsworth referred to it, was full of “gifts” of wildflowers, ferns, and mosses that they collected on their walks and brought back, like offerings to the earth.

Wordsworth frequently worked on his poems in that garden. He described the essence of poetry as “emotion recollected in tranquility,” and it is true for all of us that we need to be in the right kind of setting to enter the calm state of mind needed for processing powerful or turbulent feelings. The Dove Cottage garden, with its sense of safe enclosure and lovely view beyond, gave him just that. He wrote many of his greatest poems while living at the cottage and developed what would be a lifelong habit of pacing out rhythms and chanting verses aloud while striding along garden paths. So the garden was both a physical setting for the house as well as a setting for the mind; one that was all the more significant for having been shaped by his and Dorothy’s own hands.

Wordsworth’s love of horticulture is a less well-known aspect of his life, but he remained a devoted gardener well into old age. He created a number of different gardens, including a sheltered winter garden for his patron Lady Beaumont. Conceived of as a therapeutic refuge, it was designed to alleviate her attacks of melancholy. The purpose of a garden such as this was, he wrote, “to assist Nature in moving affections.” In providing a concentrated dose of the healing effects of nature, gardens influence us primarily through our feelings, but however much they may be set apart as a refuge, we are nevertheless, as Wordsworth described, “in the midst of the realities of things.” These realities encompass all the beauties of nature as well as the cycle of life and the passing of the seasons. In other words, however much they can offer us respite, gardens also put us in touch with fundamental aspects of life.

For more about gardening’s ability to reduce stress and foster mental well-being in your everyday life, pick up a copy of THE WELL-GARDENED MIND by Sue Stuart-Smith.

If you enjoyed this article, you may also like: 2 Houseplants for a Healthy Home

Excerpted from The Well-Gardened Mind by Sue Stuart-Smith. Copyright © 2020 by the author. Used by permission of the publisher. All rights reserved. 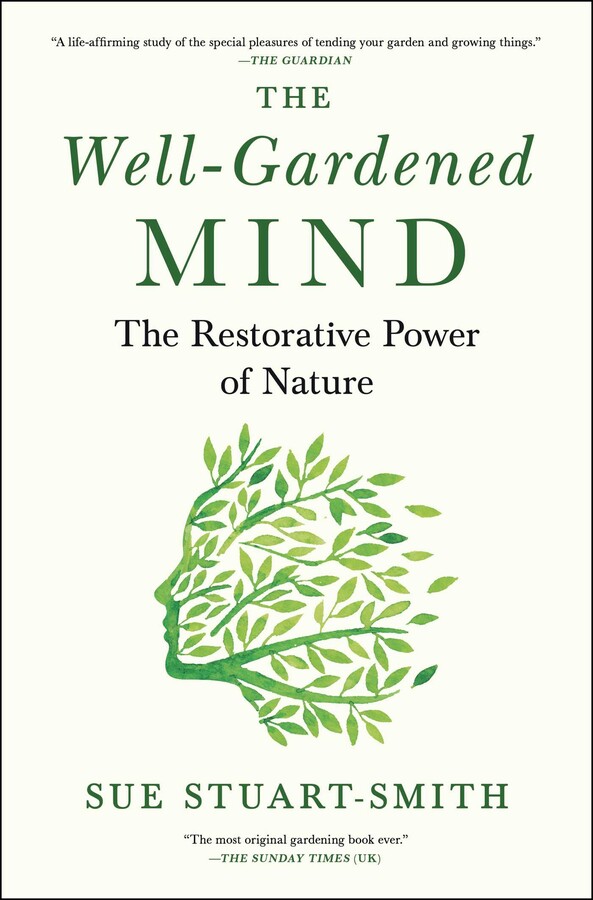 The Well-Gardened Mind
by Sue Stuart-Smith

A distinguished psychiatrist and avid gardener offers an inspiring and consoling work about the healing effects of gardening and its ability to decrease stress and foster mental well-being in our everyday lives.

The garden is often seen as a refuge, a place to forget worldly cares, removed from the “real” life that lies outside. But when we get our hands in the earth we connect with the cycle of life in nature through which destruction and decay are followed by regrowth and renewal. Gardening is one of the quintessential nurturing activities and yet we understand so little about it. The Well-Gardened Mind provides a new perspective on the power of gardening to change people’s lives. Here, Sue Stuart-Smith investigates the many ways in which mind and garden can interact and explores how the process of tending a plot can be a way of sustaining an innermost self.

Stuart-Smith’s own love of gardening developed as she studied to become a psychoanalytic psychotherapist. From her grandfather’s return from World War I to Freud’s obsession with flowers to case histories with her own patients to progressive gardening programs in such places as Rikers Island prison in New York City, Stuart-Smith weaves thoughtful yet powerful examples to argue that gardening is much more important to our cognition than we think. Recent research is showing how green nature has direct antidepressant effects on humans. Essential and pragmatic, The Well-Gardened Mind is a book for gardeners and the perfect read for people seeking healthier mental lives.