In 1994, Karen Simons lost her father unexpectedly to a heart attack. In Opening Heaven’s Door, she describes how about six weeks later, she felt his beloved presence in a very real, life-transforming way.

“After Dad died, I began driving his big, old Ford Taurus. It was comforting, in a way, the way you hang on to people’s shirts. But that’s all it was. Until about six weeks after he died.” She tilts her head and gazes past me, furrowing her brows as she tries to recall the exact timing: “It was a very cold night in January. I’m driving on the highway, and into the passenger seat comes Dad. I could feel him settle in. He had a very distinctive lean to the left, because of the way his back was. Also, you know how you know the sound of people’s breathing? How you can tell whether it’s your son or your daughter in the room? There was Dad. He rode with me from about Kennedy Road to Pickering. [Ten miles.] It was incredibly real, and it was completely transforming. I was almost giddy. I was hoping he would stay.”

She never sensed him again, and decided that he had, in effect, been taking his leave. She remembered speaking with a Buddhist friend who explained their view that the soul lingered for forty-nine days, or roughly six weeks, before departing. That, however, wouldn’t account for her aunt, whose son died thirty-five years ago. “He was a heavy-equipment operator who went through river ice into a deep and fast current. They never found him, or his machine. On a very regular basis, Allan comes and sits on the end of her bed, and they have a conversation. ‘And don’t tell me I’m crazy!’ my aunt always says.” Simons folds her hands beneath her chin, leans on her desk, gazes at me, and laughs. This is just the way life is, she is saying. Our families are full of ghosts. (Interestingly, Simons comes from Norwegian and Scottish ancestors. A study of sensed presence experiences in Norwegian widows and widowers found that an unusually high number—75 percent—reported having one.)

Surveys of people’s reactions to grief counseling show, unsurprisingly, that they often feel “unaccepted, abnormal, not understood,” when they relate these encounters to healthcare professionals who aren’t comfortable with the spiritual implications. The Australian palliative care physician Michael Barbato, moved and astonished by the uncanny experiences he repeatedly encountered in his patients, wrote that, “Only after being informed about the commonness and normality of post-bereavement hallucinations did most other widows and widowers speak freely, expressing relief from thoughts that they might be considered insane.”

Why should you be considered insane for encountering something so lovely? Here is an account from the Scandinavian writer Johan Kuld, about an experience he had shortly after the death of his wife. It is a tale that one can surely only envy: She came to him, pushing open the door of the room, smiling. “I stared at her as if I was hypnotized and could not say anything.” She felt warm, normal. She explained that she was there to say good bye, and bid him lie down on the bend with her for a time. “I did as she asked,” he wrote. “She stroked my cheek and whispered beautiful things to me. And I was filled with a feeling of joy. Then I was filled with a calm and I was surrounded with a sense of peace that cannot be described with words.” He sank into sleep as she caressed him, and when he awoke, she was gone. “This incident is still so vivid in my mind. It does not get old or fade with the years that have passed since then. I have often asked myself: ‘Could I have dreamt it all?’ But my answer is a definite: “No.” This was reality as far as there is a reality, unusual and unforgettable at the same time. 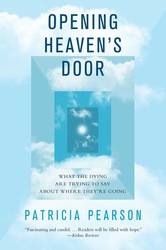 Opening Heaven’s Door: What the Dying Are Trying to Say About Where They’re Going
by Patricia Pearson

The first book by a respected journalist on Nearing Death Awareness—similar to Near-Death Experience—this “fascinating” (Kirkus Reviews) exploration brings “humor, sympathy, and keen critical intelligence to a topic that is all too often off-limits” (Ptolemy Tompkins, collaborator with Eben Alexander on Proof of Heaven).