The first place I ever loved was New York City. I had a very glamorous aunt who lived a fabulous life in a Park Avenue apartment, and from my very first visit, everything about the place—the buildings, the people, the noise, the smells—mesmerized me. As soon as I was old enough to know what I wanted, I knew I wanted to live there. And nowhere else. Ever. And so it was. I went to college in Manhattan, and after that, into publishing–the only real choice for an aspiring writer who needed a “real job.” And the years ticked by.

I was ensconced, more or less, in my publishing job and in my cozy Brooklyn Heights apartment, when I took a trip to Key West to visit a friend and wound up meeting my husband in the unlikeliest of places—on the dance floor of Sloppy Joe’s. It was a shazam moment, one on which my whole life pivoted. Within months, Jeffrey had proposed and we were making plans to move to the Gulf Coast of Florida. We’d agreed to go wherever he got the best job, and I would try to sell the novel I’d just finished while I wrote another one.

The white sand beaches beckoned. If the first place I ever loved was New York City, Jeff’s first love was Florida. A Michigan boy tired of the long, gray winters, he longed for the warmth and salty air of the beach. A childhood family vacation had glamoured him long ago. When we met, the license plate on his beat up Jeep Wrangler, muddy and salt stained (salt from snowy, icy roads, not from the sea), read “Surfin.”

Things happened quickly, as they do when the planets have aligned. Jeff got his dream job at a friend’s company. I sent my manuscript off to a few agents and gave notice at work. A few months before Key West, a realtor had called me asking if I’d consider putting my apartment on the market. “Oh, no,” I’d said. “Thanks, but I’m never selling this place.” “You never know,” she’d responded sagely. “Life’s funny.” I still had her number, so I gave her a call.

Meanwhile, I kept up my morning commute… an hour door-to-door from my place on Schermerhorn Street to my office on Hudson and Houston, by foot, over the Brooklyn Bridge. That’s where all the answers were, I’d come to realize. There was no problem—personal, professional or narrative—that could not be solved on the Brooklyn Bridge. I wondered: Where were the answers in Florida? More than that, with the murky, white-capped water churning, and the whisper of tires on asphalt rising up, and the city laid out around me, I wondered who I would be when I wasn’t a New Yorker anymore.

Still, I shed the city like an old gray overcoat. The thirteen years since I’d moved there had been wonderful and difficult, full of hard work, accomplishment, love and heartbreak, and abiding friendships. Somewhere along the way I’d stopped seeing the city I adored, bogged down by the day-to-day of navigating it, affording it, bracing against its assault on all my senses. As disloyal as it felt, I wanted a break. Jeff’s ocean dreams of swaying palms and moonlit nights, the sigh of the surf against shore, became mine as well.

Our little house on the Intercoastal sat among towering palms. As we drank coffee on our rickety dock in the early mornings, dolphins regularly passed. They might as well have been unicorns, so beautiful and mesmerizing did this city girl find them. Instead of trekking the Brooklyn Bridge, I took to walking barefoot on the sugar sand beach. To my delight, I found many of my answers there, too, with the gulls crying overhead and coquinas burrowing into the sand, and the pelicans diving for breakfast.

My mother said, “Only true love could have lured you from New York City.” She was right, of course. Jeff and I married in Key West, a year to the day that we met. A few years later, we had a beautiful baby girl and named her Ocean. In our little house, where dolphins, otters, and egrets visit almost daily, I published my first novel, and my thirteenth, and everything in between.

We never forget our first passions, and part of me will always be a city girl at heart. But it’s true love that most often guides the course of our lives. I traded my city life for my husband’s ocean dreams, and on clear nights, with my toes in the sand, I thank my lucky stars. 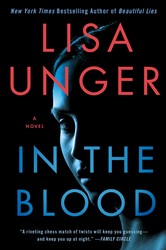 In the Blood
by Lisa Unger

The masterful psychological thriller by New York Times bestselling author Lisa Unger—“good, scary fun” (The Washington Post). Lana Granger lives a life of lies. She has told so many lies about where she comes from and who she is that the truth is like a cloudy nightmare she can’t quite recall. When Lana’s closest friend, Beck, mysteriously disappears, Lana resumes her lying ways—to friends, to the police, to herself. The police have a lot of questions for Lana when the story about her whereabouts the night Beck disappeared doesn’t jibe with eyewitness accounts. Lana will do anything to hide the truth, but it might not be enough to keep her ominous secrets buried. Masterfully suspenseful, finely crafted, and written with a no-holds-barred raw power, this is Lisa Unger at her best.