My relationship with my mother had always been complicated, but painful old wounds reopened as we struggled to cope with the devastating affects of my father’s stroke at age 79. From Knocking on Heaven’s Door: The Path to a Better Way of Death.

I cooked in my mother’s spotless kitchen the way I did at home—piling up mountainous salads at dinner and working my way through big plates of rice, vegetables, and chicken at lunch. My mother pursed her lips and sat down with my father, each before a translucent white plate holding half a peeled, sliced apple fanned like origami; three spears of ruffled romaine; and two or three translucent curls of sheep’s milk cheese. At tea, to her annoyance, I refused her offer of toast and jam. When my father methodically wheeled out the television and turned on the evening news—one of the few chores he was still capable of doing—I declined to join her in her ritual evening glass of wine accompanied by a thimbleful of peanuts in a tiny blue and white Chinese eggcup. She asked why I deprived myself of all pleasure. I asked her to let me be. She said I was paranoid and oversensitive. The next day I borrowed a pair of socks and returned them without washing them. I withdrew to my room, nursed the tail end of my flu, and moved my return flight up by a day.

The day before I was due to leave, as we unloaded groceries from the car, she stood on her doorstep and shouted that all I thought about was “Me! Me! Me!” My diet, she said, was “rigid, excessive, and ridiculous.” I could have been a teenager again, standing in the cold, tears filling my eyes. There on the doorstep, as alive as ever, were our ancient angers and griefs: my desperate need for autonomy and hers for control, our mutual inability to say, “I need you,” my craving for her love, and my fury at not getting it. I ran upstairs weeping and pulled my Rollaboard out of the closet. I was nearly fifty-six, and she was eighty.

In the emotional world there is no time. Staring out the window as my Southwest flight descended once again over the Cargill salt ponds into San Francisco International Airport, I mentally ticked off my resentments: She’d told me to eat the big zucchinis and the dark chicken meat and leave her the small zucchinis and the white meat. She’d forgotten to put out a cup for me at tea. She’d mocked my father when he couldn’t finish his sentences. Whenever my brothers—who barely remembered to call her on Mother’s Day, while I usually sent a card or a book—hinted they needed money, she’d mail out a thousand dollars to cover a month’s rent, or car insurance, or an acting workshop. But she’d insisted I pay separately for a $1.29 Burt’s Bees lip balm that I’d put in her supermarket cart.

My mother called to make up. She’d just been irritated and impatient, she said, it was her besetting sin, and she was too ashamed to talk further about it. I said I wanted an apology. “Do you mean to say I habitually treat you with disrespect?” she said in surprise, and then wailed, “I have limitations!” I got off the phone and called my brothers, indulging in our cherished tradition of bashing family members behind their backs. My brother Jonathan told me to give up on the fantasy that if I played Perfect Daughter, I’d finally earn her love.

Read another excerpt from Knocking on Heaven’s Door 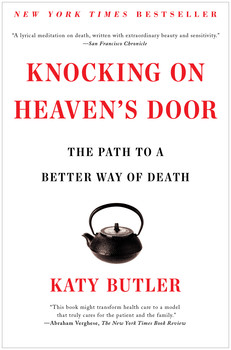 Knocking on Heaven’s Door is a map through the labyrinth of a broken medical system. It will inspire the difficult conversations we need to have with loved ones as it illuminates the path to a better way of death.