Hollywood loves writers. Some of our favorite movies just happen to be about novelists and what happens when they hit the open road. Whether it’s a book tour, research, or a road trip for the hell of it, anything can happen.

In the The End of the Tour (out now), Rolling Stone reporter and novelist David Lipsky pitches his bosses on a profile of wunderkind writer David Foster Wallace, whose epic Infinite Jest has become the literary sensation of the ’90s. He journeys to Wallace’s house in Bloomington, Indiana, then joins him on the end of his book tour. The five days he spent with Wallace became Lipksy’s book, Although Of Course You End Up Becoming Yourself: A Road Trip with David Foster Wallace and now a film (starring Jesse Eisenberg as Lipsky and Jason Segel as Wallace).

MISERY
In Stephen King‘s unforgettable tale, novelist Paul Sheldon (James Caan) makes an ill-fated decision to drive cross-country and ends up stranded with his biggest fan after a debilitating car accident. Kathy Bates won a Best Actress Oscar for her role as the unhinged Annie Wilkes.

CAPOTE
Philip Seymour Hoffman won a Best Actor Oscar for his portrayal of Truman Capote, a New York socialite out of his element in the small Midwestern town as he researches his landmark book In Cold Blood.

ADAPTATION
The film, in which Nicolas Cage stars as screenwriting twin brothers, has very little relation to the book that (loosely) inspired it, The Orchid Thief by Susan Orlean. Instead of merely researching the story, now New Yorker Orlean (played by a giddy Meryl Streep) starts sniffing orchid powder in the Florida swamps with the thief of the title (a role that earned Chris Cooper a Best Supporting Actor Oscar.)

BEFORE SUNSET
A book tour takes Jesse (Ethan Hawke) back to Paris, where he reconnects with Celine (Julie Delpy). Naturally, their memorable night together nine years earlier (in the film Before Sunrise) is what inspired his book.

Photo: The End of The Tour courtesy A24 Films 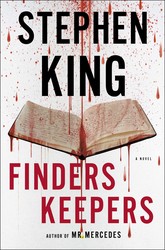 Like Misery, King spins a tale about a reader who harbors a dangerous obsession with an author, continuing the story he began in Mr. Mercedes about novelist John Rothstein and obsessive fan Morris Bellamy.

On the Road
by Jack Kerouac

This is the unedited version of Kerouac's legendary classic that he wrote in three weeks typed as a single-spaced paragraph on eight long sheets of tracing paper, which he later taped together to form a 120-foot scroll. It's "rougher, wilder, and more provocative" than the first, heavily edited version first published in 1957.

Although Of Course You End Up Becoming Yourself: A Road Trip with David Foster Wallace
by David Lipsky

In 1996, David Lipsky spent five days with Infinite Jest author David Foster Wallace for a profile in Rolling Stone. The article was never published but, after learning of Wallace's suicide, Lipsky dusted off his audiotapes of the epic, rambling interview and wrote this book that Publishers Weekly calls " a candid and fascinating glimpse into a uniquely brilliant and very troubled writer."

In Cold Blood
by Truman Capote

Capote invented the modern-day true crime non-fiction novel with this 1966 book about the murders that rocked a small Kansas town and the trial and execution of the killers. It inspired the 1967 film of the same name as well as Capote and Infamous. It remains the second-best-selling true crime book of all time, after Helter Skelter.

Fear and Loathing in Las Vegas
by Hunter S. Thompson

A "lost weekend" to beat all lost weekends, Thompson's legendarily drug-soaked road trip to Vegas resulted in one of the most-loved cult novels of all time, and the 1998 Terry Gilliam film starring Johnny Depp as Thompson's alter ego, Raoul Duke.

The Orchid Thief
by Susan Orlean

Orlean's best-selling book about a man who steals the rare ghost orchid from the swamps of Florida became the (much-changed) movie Adaptation. In this new edition, Orlean revisits the story 15 years later, including her thoughts on the film in which Meryl Streep played a highly fictionalized version of her.