Imagine meeting your favorite celebrity while in the grocery store or while walking your dog. What would you say? What would you do? How would act? How do you make it worth their while? Steve Sims, author of BLUEFISHING, shares how to make the interaction memorable and meaningful.

A client of mine, a CNBC commentator, wanted to meet the members of Journey. You know, “Don’t Stop Believing” and “Wheel in the Sky” and “Any Way You Want It.” Yeah. Top ten rock band of all time, Journey.

Dan had earned his way through college many years before as a singer and guitarist in a cover band doing only Journey songs. His cover band did their best to act and look like the originals, which got them more gigs. He spent his college years sleeping on friends’ couches, while singing his heart out in local bars for a few bucks. It wasn’t a cakewalk, but performing Journey songs got him his degree, which ultimately enabled his future success in media.

Dan was in his midfifties when he called me up. He was working for CNBC, and of course, no longer living on the couch or singing in dive bars. Life was good, so he wanted to go back to Journey, to the actual guys themselves, and say thanks. He wanted to simply say, “You helped drive me in my down days. Your music was what got me going to be able to do the work I needed to do.”

That was the entirety of his challenge to me. He just wanted to meet them. When Dan was telling me his story, he came alive just talking about Journey. He threw song titles at me as though they were Bible verses. His passion and gratitude for the band was something you could feel.

So, I said to him quite bluntly, “Let me be completely clear. You’re telling me that if you meet these guys, walk up and shake their hands, and then walk away three minutes later, that’s enough for you? That’s what you want me to arrange for you?” He looked uncertain. He hadn’t thought there could be more.

Then we set about really brainstorming on it. “What if we see them at a recording studio and you get to watch them jamming? Or maybe visit during a sound check or something? Something that gives you a bit more of a personal one-on-one interaction, more than just having them sign a book or an album for you or something like that.” He said “Absolutely. No question.”

From there we took it as far as we could. I got him everything he never imagined. I put him on stage with the band in San Diego. Dan sang four songs as the shortesterm lead singer of Journey. For those four songs, he was in. He was living his dream. We also raised more than six figures for a good cause, which I’ll tell you about in a second.

Now, the first thing anyone reading this is going to say, “Well, I can’t pay money like that for a dream. That’s how the other half lives, but not me.”

No. I remember that the original budget was fairly low. Dan made good money with CNBC, but he remembered his days of having nothing at all, and he wasn’t the sort of guy to be frivolous.

We started at the end and worked backward. We knew what the dream had to conclude with. We knew that if he was the lead singer of a cover band when he was a kid, the only way to make it really magical would be to have the full band behind him. A meet and greet wasn’t the dream; being part of the group was. So we just had to find a way to make it work. We started researching. The way Bluefishers do research is to look for connections. We look for what people are passionate about and look for a way to find a win-win for their passions.

We knew that Dan’s nephew had autism. It didn’t take too much research to discover that Journey’s drummer son also had autism. Both Dan and the drummer had a deep passion for helping autistic kids, thus we were able to use this connection between two people to get them interested in doing something together for the cause. What we did was raise a major chunk of money in the form of charitable donations for Autism Speaks. So we managed to find a route to get what a client wanted, that also benefited someone else. Actually, we benefited a lot of someones, because we wound up creating a major amount of awareness for Autism Speaks. To make that happen we never took our eye off the ball: Our end goal was still to get Dan on stage singing with Journey. We just changed how we got there.

If you run into your favorite celebrity, don’t get too nervous! Embrace your fears with this exercise. 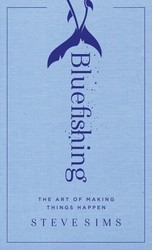 The man who created Bluefish, the internationally famous company that makes once in a lifetime events happen for the rich and famous reveals to the rest of us his trade secrets for making things happen.Steve Sims’s day job is to make the impossible possible. With his help and expertise, his clients’ fantasies and wildest dreams come true. Getting married in the Vatican, being serenaded by Andrea Bocelli, and connecting with powerful business moguls like Elon Musk are just a few of the many projects he has worked on. He rarely reveals how he accomplishes the feats that make his clients so happy. But now for the first time, Steve shares his practical tips, techniques, and strategies to help readers break down any obstacle and turn their dreams into reality. The core of his philosophy focuses on simple, yet effective ways to sharpen the mind and gain practical skills that can help you learn a new perspective and accomplish anything. Whether it’s climbing Mount Everest, launching a business, or applying for a dream job, you can make incredible things happen for yourself by applying his insightful advice such as: -Ask Why Three Times -Never be the First Call -Don’t be Easy to Understand, be Impossible to Misunderstand With colorful and enlightening stories of people driven to achieve the impossible, this book will inspire you to transform your life and aim for the unthinkable.