In Tim Gunn’s Fashion Bible, the ever-stylish Project Runway fashion guru declares “Thou shalt look fabulous.” His informative book, co-written with Ada Calhoun, provides a history of clothing through the ages—did you know jeans originated in Italy?—and suggests which clothes look best on you. He doesn’t just preach fashion do’s and don’ts, although Gunn isn’t shy about sharing which clothing trends he can’t stand.

Here are some of our favorite Gunnisms as he goes through the typical closet, item by item.

1. “Tight underwear is your friend, America!”
In years past, women had to wear corsets or girdles to “control” their figures, but with the liberated styles of the 20th century, more and more people want to just let it all hang out. If you also want to look good in your clothes, a little constraint is a small price to pay, Gunn argues, especially since less constricting garments like Spanx are available. “You have to make a choice between freedom and security,” he argues, admitting that he also employs shape wear to look his best.

2. “The T-shirt’s omnipresence is the triumph of American sportswear—and, in my opinion, its great tragedy.”
T-shirts are a tragedy? Oh no! Tell that to a nation obsessed with the cotton tee, whether it’s an excessively oversized hip-hop uniform or an upscale designer shirt that cost several hundred dollars. “A t-shirt is strictly casual wear,” Gunn insists. And don’t think you’re immune, hipsters: While large T-shirts are the biggest offenders, too-tight tees are just as bad.

3. “Is skin showing at your waist? If so, hear me screaming at you to find a longer shirt.”
Again, find a size that fits: Too short is just as bad as too long. That flesh belt is doing you no favors, says Gunn.

4. “I’ve come around to the wisdom of the low-rise jean.”
Surprised that Gunn approves of hip huggers? There’s a simple reason: It’s easier to find the right fit when you’re just fitting your hips instead of trying to find a cut that also fits your waist. Of course, make sure that the shirt you wear is long enough to cover an existing muffin-top. “No one should even realize you’re wearing low-rise jeans, just that you look good,” he explains.

5. “I generally advise against bell-bottoms unless you are, in fact, a hippie.”
No surprise that Gunn isn’t a fan of hippie chic, which is what the bell bottom suggests to him, so he recommends pants with no flare and no taper. But there’s a far worse sin when it comes to jeans, as far as Gunn is concerned…

6. “There is no place in this world for a jegging.”
Future Project Runway designers, take note!

7. “The baggy cargo capri is the single worst item of clothing in America today.”
Gunn understands why women love the baggy capri pant: It doesn’t have to be hemmed and it fits women with wider calves. But, he insists, “It’s flattering on no one.” He hates them so much, in fact, that he wants to rid America of them all together: “At malls, I am tempted to set up the fashion equivalent of a guns-for-cash or needle-exchange booth and call through a bullhorn: ‘Throw your cargo capris into the flaming trash can, step behind the screen, and claim your wrap dress.’ I would find it very cathartic.”

He is a fan of the fitted capri pants that stars like Grace Kelly and Mary Taylor Moore used to wear, as those weren’t “shapeless and frumpy” like their modern-day cousins.

8. “A belt can work magic.”
Gunn researched the history of belts, which originated as a way to wear amulets or other magical objects. And so adorned belts became a status symbol. “Cowrie-shell belts were the Louboutin of prehistory,” he writes in his book’s chapter, “Belts: Friend to Soldiers and Vixens.” Belts are not only fashionable, they’re a darn sight easier to work than suspenders, which Gunn decries as ” a contraption” that is “not for the lighthearted,” after describing the ordeal it takes to get into a tuxedo with the blasted things.

9. “If you have to ask whether you’re too old to wear hot pants, you’re too old.”
Gunn argues that his fellow Project Runway judge Heidi Klum can still carry off the shortest skirt (although it might require some strategic placing of the camera), but that as a rule, as women age, they should bid adieu to the miniskirt. “If you genuinely want to be perceived as the town tramp, that’s another matter,” he jokes.

10. Just say no to dirndls.
Gunn is iffy on maxis in general, but he’s firmly against one specific long skirt style: The German dirndl. ‘It’s frumpy and it’s associated with the Nazis. There is literally nothing to recommend it.”

11. “I encourage all women to invest in a couple of flattering wrap dresses.”
Gunn has always been a fan of the wrap dress, as popularized by Diane Von Furstenberg in the 1970s. “It makes women look feminine, pulled together, and at ease in the world… it’s easy, one-step dress: it travels well, and it’s easy to care for.” Just make sure the dress fits your shoulders “and the rest of the dress takes care of itself.”

12. “I don’t object to a baseball hat… I do object to trucker hats.”
Gunn accepts that Americans will never wear return to the Mad Men era of fedoras (except in an ironic way), and notes, “We’re not anti-hat. We’re just against dressing up. He doesn’t mind the ubiquitous baseball cap, but he argues that old-fashioned hat etiquette still applies, including “men shouldn’t wear hats indoors, period.” Unless there are religious reasons, Gunn says to “get over it” and take your hat off already. 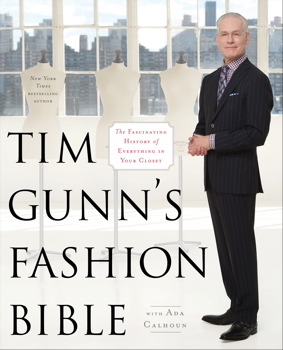 Tim Gunn’s Fashion Bible: The Fascinating History of Everything in Your Closet
by Tim Gunn

In the beginning there was the fig leaf...

and the toga. Crinolines and ruffs. Chain mail and corsets. What do these antiquated items have to do with the oh-so-twenty-first-century skinny jeans, graphic tee, and sexy pumps you slipped into this morning? Everything! Fashion begets fashion, and what was the height of style yesterday has evolved into the trendsetting looks of today.

Join Project Runway’s Tim Gunn on an epic tour through centuries of what women and men want and have always wanted—to look and feel their best in clothes that express who they are—embellished with Tim’s personalized commandments of the closet to help you build the perfect wardrobe for every occasion.