Aging is inevitable, yet growing older often has a negative stigma attached. However, it’s actually a process that should be cherished. We should be focusing on how each decade brings us new life lessons, friendships, and experiences. Judith Viorst, the author of NEARING NINETY, encourages us all to embrace the positive moments that life brings, no matter how many candles your birthday cake has on it this year.

Viorst’s poetic writing illustrates the lighthearted experiences that life throws at all of us. She reminds readers to not take life too seriously and to enjoy every second we have with our loved ones. In one of her poems in NEARING NINETY, Viorst reminds us to live our best life at every age:

Since it’s looking as if my legacy isn’t shaping up to be Peace on earth and universal health care, Here’s what I’m hoping to be remembered for:

Showing up when I say I’m showing up. Sticking with what I’ve started until it’s done. Sending valentines to all the children in our family (until they reach the age of twenty-one). And never, ever leaving the house without eyeliner.

Playing a relentless game of Scrabble. Keeping the secrets I promised I would keep. Being able to laugh about the bad things that happen to me (Though not before I first whine, and weep, and rail against my fate, and blame my husband).

Doing work I’m able to be proud of. Making a truly transcendent matzoh ball. Coming to terms with mortality (though, to be perfectly honest, I’m still not feeling all that thrilled about dying).

For more Tips on Life & Love, discover The Benefits of Aging with Trust

Excerpted from Nearing 90 by Judith Viorst. Copyright © 2019 by author. Used by permission of the publisher. All rights reserved. 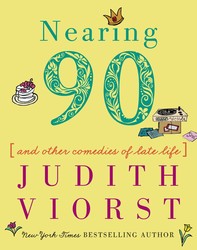 In Nearing Ninety, bestselling author Judith Viorst candidly shares the complicated joys and everyday tribulations that await us at the age of ninety, all with a large dose of humor and an understanding that nothing—well, almost nothing—in life should be taken too seriously. While she struggles to make it to midnight on New Year's Eve, while she’s starting to hear more eulogies than symphonies, while she’ll forever be disheartened by what she weighs (and forever unable to stop weighing herself), there is plenty to cherish at ninety: hanging out with the people she loves. Playing a relentless game of Scrabble. And still sleeping tush-to-tush with the same man to whom she’s been married for sixty years.

Accompanied by Laura Gibson’s whimsical illustrations, Nearing Ninety’s amusing and touching reflections make this collection relatable to readers of all ages. With the wisdom and spunk of someone who’s seen it all, Viorst gently reminds us that everybody gets old, and that the best medicine at any age is laughter.