Do ghosts, demons, spirits–the things that do the bumping in the mythical night–really exist? This is the second most frequently asked question put to me by readers (“Do you ever scare yourself?” is the first, and my reply is “Yes”).

In a fundamental way, my answer doesn’t matter much. They’re novels, after all. Narratives seeking to render a coherent world unto themselves, a new corner of mythology that might be claimed for itself. What I believe is as relevant as what I had for lunch.

But one’s relationship to the paranormal is perhaps a special case. To write about the supernatural requires, I think, at least an admission to its possibility on the part of the author, if not outright belief. Otherwise it would be like a sociopath writing about love.

So let me say that while I’ve read a great deal about others’ experiences of the supernatural, I’ve had virtually no experience of it myself (the “virtually” being key here). Yet so many intelligent, sober-minded, skeptical people have told me of their encounters with things they can’t rationally explain that I certainly believe that they believe it. And this is why I write the books I write, what widens what I consider to be the range of the possible.

In a nutshell, my working theory is that the supernatural–the disruptions and visits in all their forms that we take to come from the Other Side, whatever or wherever that might be–all comes down to energy. Every living thing has it. And energy can never be destroyed (you can pour water on a fire and put it out, but its energy doesn’t “stop”–just look at how the water turns to steam). Now consider the theory that our emotions and thoughts have energy too. Love, hatred, desire, sorrow. If you’ve ever felt them you know they don’t come from nothing. And if we see them as energy, they must become something else even when they–and we–are gone.

All this may explain why so many ghost stories concern lives ended by violence or so-called crimes of passion. Logic would suggest that heightened emotions produce greater energy, and may leave traces behind in the living world even after the moment of violence has passed.

In Japan, documented reports are emerging of a spike in ghost sightings since the terrible tsunami hit its shores, taking thousands of lives in an instant. These accounts are varied in their details, but share characteristics of spirits suffering the disorientation of sudden loss. They ask after missing loved ones, wail in lonesomeness, appear wet-haired and shivering at bus stops long washed away, waiting to be taken home.

But is it the dead who haunt us, whose energy we detect when we “see” them, or is it us, the living, who summon them somehow, who make them come into being? Based on my own sliver of experience and a distillation of my reading, I figure it’s a combination of both.

Some months ago, my wife was re-reading my most recently published novel, The Demonologist. At the same time, I was talking to her a lot about the new novel I was researching and outlining and generally obsessing over. Both stories involve the supernatural, dark spirits that cross over from the underworld and into ours. My wife is less comfortable about these topics than I am, though she gamely entertained my questions and conversation for a stretch, even though it was all making her anxious. Considered another way, her anxiety was a side effect of her opened perceptions.

One afternoon I emerged from a workout at the gym to see that my wife had left a message asking me to call home. When I did, she told me to get home as soon as possible, as “Something weird is going on here.” The weirdness involved her return from a run to find the blind that covered the glass pane of our front door drawn up to the top. She distinctly remembered noting how the blind was all the way down before she left the empty house and locked the door behind her. Was there someone in the house, waiting? “Get out now and call the police,” I told her. “I’ll be home soon.”

The police arrived and searched the place. Empty. No signs of entry, forced or otherwise. Afterwards, my wife told me she felt as if her own mind–its fears–had been connected to the raised blind, which she saw as a show of presence. Since then, I don’t talk to her about the scary stuff in my work nearly as much. No blinds have been lifted since.

Was it just my wife’s imagination? One of our two kids might have lifted the blind that morning and she hadn’t noticed in her rush to get out. She might have done it herself. And admittedly, as hauntings go, this one is on the quotidian side, so small a thing it wouldn’t make the cut in a movie or thriller novel.

But real life isn’t a movie or thriller novel. It’s a thing we experience, that we feel in immediate ways. It’s living energy, or what we call nature. Which is why my mind is open to the possibility that the natural, to the extent that it speaks for all the things that make us human, might encompass what we currently call the supernatural, too. 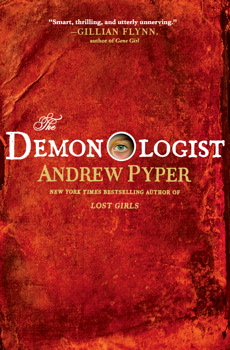 The Demonologist
by Andrew Pyper

Fans of The Historian won’t be able to put down this spellbinding literary horror story in which a Columbia professor must use his knowledge of demonic mythology to rescue his daughter from the Underworld.