Even today, this kind of match-making is common practice in Deborah Feldman’s former Hasidic community, she reveals in her tell-all book, Unorthodox: The Scandalous Rejection of My Hasidic Roots. Here, a recently engaged Deborah and her Hasidic friend Mindy discuss Mindy’s (lack of) marital options.

Mindy and I spend our free moments after school going over the photos from the engagement party in our usual spot at Lee Avenue Pizza, scooping our soft ice cream into the hot coffee, where it dissolves in syrupy streams as we hurry to catch it at that perfect moment before it’s completely melted. Mindy tells me her brother had a match suggested for him, finally, and she’s pretty sure he will be engaged soon. Mindy will be free to be set up as soon as he is accounted for.

A part of her is wistful, afraid of losing me to that first-year honeymoon bliss she claims comes to all her friends after they are married. Another part of her is a little envious of what she sees as my pending independence, she confesses candidly. Pretty soon, I tell her, you’ll be married off too. It’s only a matter of time.

“Who do you think your parents will set you up with?” I ask, but what I really mean is, will you have to wear a shpitzel, like your mother, or will you rebel a little bit and fight to be matched with someone who will let you wear a wig and go to the library? For Mindy, marriage may not necessarily mean the independence she craves.

She’s never said anything, but I wonder if she’s jealous of me, seventeen and about to receive the key to freedom and independence. Mindy is older than I am, and even if she does get married soon, there’s no guarantee her life will be any different. I’m grateful I’m not getting married to someone who is extremely religious or controlling. I couldn’t imagine having to leave the tight grip of my family only to end up in an even more restrictive situation.

“Do you think you’ll get to choose?” I ask, wondering if Mindy can plead with her father to pick someone more likely to be understanding of her nature. “Maybe someone in your family can intervene for you?”

“I don’t know,” she says pensively, running her fingers through her shiny black hair and letting it fall back around her high, square forehead. “I don’t want to think about it yet, not before I have to.”

I nod understandingly, stirring the lukewarm coffee mixture aimlessly with my plastic spoon, watching as the Mexican kitchen workers slap the pizza dough around on the counter. Most of the women I know who have gotten married lead the same lives they did before. They spend their days shuttling back and forth between their parents’ home and their new apartment, busying themselves with daughterly and wifely duties. But perhaps they don’t want anything else; perhaps that is the life they desire. But for women like Mindy and me, that life will never suffice. Especially for Mindy. She will never settle down and just be a housewife.

Mindy shakes her head vigorously as if banishing unpleasant thoughts, and a familiar, mischievous smile spreads on her face, crinkling her eyes. “Promise you’ll tell me everything you learn in kallah classes?”

My gut feeling turned out to be right. Mindy’s marriage was arranged only a year later, and like all her sisters, she married a deeply religious man. He disapproved of secular books, and it was harder to hide them from him than it had been to hide them from her family. She stopped reading and busied herself with having children. The last time I saw her before we drifted apart, she had already given birth to three and was pregnant with her fourth. She smiled at me from her doorway, juggling a toddler on her hip. “It’s what God wants,” she said, nodding sheepishly.

I turned away from her and walked down the stairs of her apartment building with a sick feeling in my stomach. That woman in the doorway was not the Mindy I knew. The woman I knew would have asserted her independence. She would not have given up and accepted her fate.

That phrase, what God wants, infuriated me. There is no desire outside human desire. God was not the one who wanted Mindy to have children. Couldn’t she see that? Her fate was being decided by the people around her, not by some divine intervention. There was nothing I could say. Already her husband had decided I was a bad influence. I would not make her life difficult by insisting on seeing her. But I always remembered her. 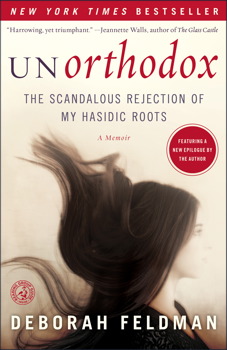 As a member of the strictly religious Satmar sect of Hasidic Judaism, Deborah Feldman grew up under a code of relentlessly enforced customs governing everything from what she could wear and to whom she could speak to what she was allowed to read. It was stolen moments spent with the empowered literary characters of Jane Austen and Louisa May Alcott that helped her to imagine an alternative way of life.