Did your ex ghost, leaving you unsure about how or why the relationship ended? It’s all too common, and it sucks that you have to be the one to figure out what went wrong. Here is a simple plan for evaluating what happened and getting over it, so you don’t get yourself into this mess again. Read more about it in I Had a Nice Time and Other Lies…: How to Find Love & Sh*t Like That.

The name of the game is Replay, Reconsider, and Repeat. (Yes, it’s a play on Lather, Rinse, and Repeat. Great observation, are you like a Mensa scholar?) Unless you’re dirty AF, the goal of a hair-shower (not to be confused with a body-shower, which you should do daily) is to get rid of the dirt and oils that have accumulated on your scalp and hair throughout the day(s). Now think of that dirt you’re removing like the guy you’re seeing. If you can get rid of him with just one rinse, congrats. But if you can’t, keep repeating, Betch. He’s bound to get out of your hair eventually.

Step One: Replay
Replay the relationship in your head. But instead of looking at it from your biased and slightly fantasized perspective, look at it from his. Don’t be too hard on yourself, but imagine what he was thinking during each conversation or situation that you think may have taken part in your relationship’s demise. When you were saying, “I’m having a birthday party Saturday, you should stop by if you want,” is it possible he heard, “I want you to meet all my friends and celebrate a life milestone with me, and I’m just tricking you into a relationship”?

Step Two: Reconsider
Now that you’ve seen his perspective, it’s time to be realistic and reconsider the situation. Delve deeper into what the actual truth of each situation is. Only then will you uncover what was actually wrong with the relationship and your communication. Here, even though it hurts, try to be as real as you can. Maybe after some consideration you realized that you didn’t really know him, and he didn’t know you at all. You even asked your friends what they thought of him and they’re like, What’s he look like again? Perhaps you were obsessed with the idea of him and not actually him. You know that saying that goes “there’s your side, his side, and the truth”? Well the goal of this process is to see the truth. You’re not a forty-five-year-old alcoholic homemaker from the 1950s; you don’t need to lie to yourself.

Step Three: Repeat
Repeat this until you come to the inevitable conclusion that you two just weren’t right for each other and, more important, he wasn’t right for you. So whatever happened during whatever period of time you were dating eventually ends up irrelevant and you accept the fact that you don’t even need to hear his side of the story because your version is about one billion times more profound than any bullshit he will have to say.

You’re a betch, so you’re pretty fucking smart, or at least smart enough to figure out that guys are pretty fucking stupid. As long as your reasoning isn’t entirely delusional (again, lying to yourself isn’t cute and is instead marginally psychotic), then you’ll be able to get over him 100 percent of the time. Unless he like, died. Then take comfort in the fact that at least you weren’t dumped and like, see a real therapist. 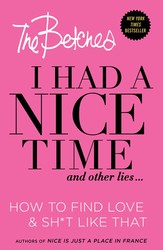 I Had a Nice Time And Other Lies…
by The Betches

The New York Times bestselling authors of Nice Is Just a Place in France and creators of the online humor and advice phenomenon Betches.com and Instagram account @Betches explain the brutal truths of how to date like a true betch, with insights from the Head Pro.In the age of Tinder, Hinge, or any other dating app that matches you with randos, the dating game has grown complex and confusing. Cue the Betches—first, we helped you win at basically everything, and now we’re going to help you win the most important battle a betch can face. Maybe you’re a Delusional Dater who needs to get in touch with reality (seriously, he’s just NOT that f***ing into you) or perhaps you’re a TGF who needs to stop being so desperate and start playing the game. Or maybe you’re just tired of swiping left and ready for the pro of your dreams to put a 15-karat diamond ring on it so you can stop pretending to do work. Either way, we’ve got you covered. With insight from the Betches’ own Head Pro, this book is a must-have bible for any betch looking for love. So put away the Ben & Jerry’s fro-yo (just because it’s low fat doesn’t mean it’s okay to eat the whole tub) and start dating like a winner.