Have you ever made a decision because it’s what you think you’re supposed to do–instead of because it’s what your internal compass tells you to do? If your answer is yes, you’re in the majority. I think that “what I’m supposed to do” is a drumbeat that many of us have followed from time to time. I know I have. But the older I’ve gotten, the more I’ve realized that when I make choices under pressure, I often choose incorrectly.

Why? It’s because the people placing expectations on us–whether consciously or unconsciously–can’t possibly know all the minute details of a situation, simply because they can’t see inside our heads.

As I wrote recently for Redbook.com in an essay about waiting until my mid-thirties to marry, I felt the pressure to settle for someone long before I met my husband. I knew there were loved ones who believed that I would be better off if I simply squared away the marriage portion of my life. After all, the average age for a first marriage in the United States is 27 for women–and I was far beyond that.

By the numbers, I was supposed to marry before my mid-thirties. But those numbers mean nothing. I realize that now, and I’m so grateful that I didn’t listen to all those voices and settle too soon.

People applying external pressure–whether it’s pressure telling you to get married, or to have a baby, or to go back to school, or to act differently in some way–usually mean well. Sometimes those closest to us are the ones trying to exert the most influence. But that doesn’t necessarily make them right. Advice from the people who care about you is always worth listening to. After all, it’s coming from a place of love and concern. But ultimately, you’re the only one who can make the decisions that are right for your life.

So as we move into the New Year, make a resolution: That you’ll do your best to listen to your own voice, too. Take the well-intentioned words of others into consideration, but always listen to your own heart before you make decisions. It’s the best way to pave a road to happiness, because you’ll be living a life that you plot out instead of living a life that others feel is best for you.

I’m not always great at doing this myself. I still occasionally make decisions based on what I feel I’m supposed to do. But I’m learning. And one of my New Year’s resolutions for 2015 is to do a better job of making decisions for myself. Each time I’ve done that, I’ve made my life just a little brighter. 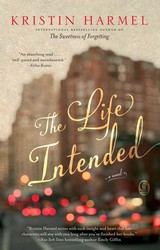 The Life Intended
by Kristin Harmel

From the author of the international bestseller The Sweetness of Forgetting, named one of the Best Books of Summer 2012 by Marie Claire magazine, comes a captivating novel about the struggle to overcome the past when our memories refuse to be forgotten.In this richly told story where Sliding Doors meets P.S. I Love You, Kristin Harmel weaves a heart-wrenching tale that asks: what does it take to move forward in life without forgetting the past?