One of the first people I invited into my life as an “out” transgender woman was my best friend, Mai. From Redefining Realness: My Path to Womanhood, Identity, Love & So Much More.

Mai and I bonded over the fact that we were women of color in corporate America, over a silly devotion to The Hills, and over a mutual love of vintage shopping. Most important, we were both on the rebound, having left our starter relationships, longing for partnership.

There were moments of deep intimacy and sharing during our three-year friendship when I felt myself pulling back, withholding details that would reveal me. I remember that evening after her thirtieth birthday when we were placing her clothes (including a Minnie Mouse costume that still cracks me up), DVDs, books, and photos in cardboard boxes. She was sitting on the hardwood floor in gray sweatpants, weeping over leaving a man who was no longer good for her. “I don’t know if I can do this,” she said. “I don’t know if I’m strong enough to do this on my own.”

“You’re not alone,” I said, writing “sweaters” in bold print on a cardboard box with a black Sharpie.

“You will do this,” I assured her.

My heart was open, and I was ready to bare myself to her, to tell her that I knew she could do this alone because I once was a scared girl afraid of the unknown, of stepping out on her own. I pulled myself back and protectively squashed my instinct to share with her because I was too afraid that if I told her, she would think of me differently. Instead, I hugged her, grabbed another box, and filled our glasses with cabernet. A year later, we were in different places, and our friendship had grown constant, reliable, sisterly. Unlike when I was a teenager, I knew I didn’t have to do it all alone. I had someone I could rely on, to share my anguish over the grayness of my relationship with Aaron. I called Mai wracked with fear. “I need you to know that I’ve wanted to share something with you many times but was scared,” I told her over the phone.

“Janet,” Mai started in her ever assuring way, “there’s nothing you could do that would make me not love you.”

“You know how you’re always teasing me that you don’t know why Aaron wouldn’t want to be with me, that he’s idiotic and all that stuff?”

“Well, he doesn’t want to be with me mostly because of my past,” I said.

After I told Mai my story, she yelled at me for scaring her: “You acted as if you murdered someone!” When we met that evening for dinner, she hugged me, acted just as silly as she normally did, and reiterated that Aaron was still idiotic not to be with me. Her friendship buoyed me as I spoke the truths I’d silenced long ago.

I lived in a world that told me in big and small ways every day that who I knew myself to be was invalid. I blossomed in spite of a society that didn’t offer me a single image of a girl who happened to be born a boy, who was thriving in the world, off the streets, away from some man’s wallet, basking in the reality of her dreams. As I typed away every morning in my bedroom before going to my office cubicle, I broke down those walls of shame about being a different kind of woman. I grew more confident, stronger, realizing that I deserved love. 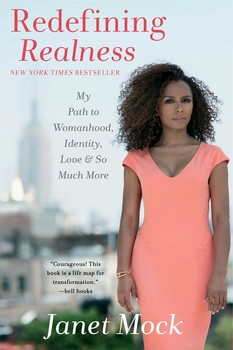