How do you find your humanity? What is it? Part of a classic Chinese education was memorizing the Book of Songs, a book of poetry considered to be the cornerstone of Chinese education. But the true meaning of the poetry did not come simply from rote knowledge. Mixing context in new and unexpected ways led to deeper meaning for the conscientious student. From The Path: What Chinese Philosophers Can Teach Us about the Good Life.

In classical China, a person who wished to become educated had to first memorize a collection of poetry called the Book of Songs. It became part of a learned person’s repertoire. People memorized the poems so that, in any situation—the passing of spring, a debate over policy, the joy of new love, the death of a friend—they could quote passages that those around them, knowing the same pieces, would understand.

But the point wasn’t to just memorize poems and passively recite them aloud. It was to draw actively upon one’s knowledge of the poems and one’s reading of the real-life situation and rework them both in innovative ways. By learning to assess situations and then quoting a line of poetry out of context, say, or making a counterintuitive allusion, you would elicit certain emotional responses from you and your listeners, altering their moods and thus moving the situation in a different direction. Poetry became another important means of refining one’s response to the world, as people were trained to sense how they could use it to affect listeners for the better.

Music worked much the same way. It was common for music to be both played and performed (like an opera or musical) and to reflect dramatic stories from antiquity. People watched these performances from the time they were children, and the musical repertoire became part of the fabric of their lives. If they found themselves in a situation where they needed to stand up to someone, for instance, they could draw on the emotions they’d felt listening to a piece of music such as the Wu, a popular work about a virtuous man who stood up to the arbitrary power of the Shang dynasty to became the first Zhou king. A piece like this informed their sensibilities; it became a part of them.

Music and poetry were important parts of what it meant to become a learned person, to find humanity, because they cultivated certain sensibilities of calm:

They cultivated qi by allowing a person to draw on them to feel more responsive, more connected, and more resonant with the entirety of shared human experience. They could induce sudden clarity and moving insight into what it means to be human.

The path to humanity doesn’t end there. Chinese philosophers have also taught us the key to finding our human strength. 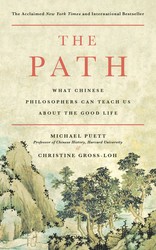 The Path
by Michael Puett and Christine Gross-Loh

For the first time, an award-winning Harvard professor shares his wildly popular course on classical Chinese philosophy, showing you how ancient ideas—like the fallacy of the authentic self—can guide you on the path to a good life today.Why is a course on ancient Chinese philosophers one of the most popular at Harvard? Because it challenges all our modern assumptions about what it takes to flourish. Astonishing teachings emerged two thousand years ago through the work of a succession of Chinese scholars exploring how humans can improve themselves and their society. And what are these counterintuitive ideas? Transformation comes not from looking within for a true self, but from creating conditions that produce new possibilities. Good relationships come not from being sincere and authentic, but from the rituals we perform within them. A good life emerges not from planning it out, but through training ourselves to respond well to small moments. Influence comes not from wielding power but from holding back. Excellence comes from what we choose to do, not our natural abilities. In other words, The Path “opens the mind” (Huffington Post) and upends everything we are told about how to lead a good life. Its most radical idea is that there is no path to follow in the first place—just a journey we create anew at every moment by seeing and doing things differently. “With its…spirited, convincing vision, revolutionary new insights can be gleaned from this book on how to approach life’s multifarious situations with both heart and head” (Kirkus Reviews). A note from the publisher: To read relevant passages from the original works of Chinese philosophy, see our ebook Confucius, Mencius, Laozi, Zhuangzi, Xunzi: Selected Passages, available wherever books are sold.