Growing up, we are all taught that we need to make ourselves heard. Our voice is powerful and important, but when we care more about our voice than listening to others, it can be harmful. Todd Davis, author of GET BETTER, explains we should talk less and listen more.

When you don’t talk less and listen more, your room may feel like Sartre’s hell because:

You alienate people who might otherwise respect and confide in you.

Before we get into the specifics, please understand that talking less and listening more is not the same as agreeing with people. When I talk about listening, people often push back: “I can’t let them go on and on. I don’t want them thinking I agree with them.” You may ultimately disagree with what a person is saying or feeling, but while you’re listening, you’re not imposing your views on the person. You’re not trying to figure out how to get him or her to see it your way. In- stead, you’re suspending your opinions long enough to really step into that individual’s world and try to understand it from his or her point of view. This approach sounds simple, but it’s one of the most difficult mindsets to master, especially if you’re diametrically opposed to that person’s point of view or emotionally involved. It takes an incredibly mature person to master this skill. (See all other practices in this book for details on how to increase your maturity level.)

A few years ago we made a change in the pay plan for our sales leaders. One of our highest-producing individuals emailed me and communicated just how upset he was about the change. My phone rang, and I saw his name pop up.

“Thanks for taking my call, Todd,” he said.

“You’re welcome. I know you have a lot of questions about why we made the change, which I’m happy to answer. But first, I really want to hear your concerns. So I’m just going to listen.”

“I want to give you context for why I’m upset and share with you how a few of my colleagues are feeling,” he continued.

“Okay,” I responded. “That would be helpful.” He spent the rest of the call sharing his frustrations and the impact the new plan was having on his and others’ compensation. Several times I reflected back what I heard him saying—not agreeing or disagreeing with him; just seeking to understand. Here are a few things you might have over- heard during the call:

“You don’t feel that your compensation should be tied so closely to a new salesperson’s revenue who reports to you?”

“You sound pretty frustrated with the new plan.” “You feel like our pay plans have changed too frequently?”

I also asked several clarifying questions during the call:

“What would you have done differently in communicating the sales plan?”

“What revenue goal do you believe is possible to achieve with your new people?”

“What could we do in supporting you to achieve that goal?”

Once he felt comfortable that my intent was to understand, he started to ask more questions about why we’d switched plans. I explained the reasons as best I could. We were into the conversation about thirty minutes when, to my surprise, he said, “I wish we could have waited until the end of the year to make this change. But after talking, I don’t know if there will be a better time than now. You know, I’d probably do the same thing if I were in charge.” Because I didn’t jump in to explain or defend the corporate position, my col- league had a chance to vent. Once he felt understood, he was in a better position to return the favor and listen to another point of view.

Now, please don’t misunderstand—I’m not saying that all you have to do is listen and solutions will magically appear. There are appropriate times to talk more and listen less. Often it’s necessary to give advice and provide clear answers and direction to get the job done. But there are times when it’s also vital to do the opposite. When a person is highly emotional, or when the Emotional Bank Account balance is low (see “Practice 8: Take Stock of Your Emotional Bank Accounts”), or you’re not sure you fully understand, you’ll almost always bene t from talking less. By carefully listening and understanding first, be- fore you advise or give solutions, you are in a much better position to grasp the real issues. Once you accurately address the situation as well as the person’s feelings, he or she will feel more respected and trust will grow.

Once you have the attitude of really listening, it’s time to apply the skill. It’s counterintuitive yet ridiculously simple. Essentially, it’s the ability to reflect back to people what they are saying and what they are feeling. But when it’s done earnestly and authentically, it creates magic: it brings the speaker to a greater awareness of what he or she is feeling; it brings the listener into a rare state of empathy, and it creates a trust and rapport in the relationship that can’t be matched.

Listen to others over a nice cup of spiced saffron tea. 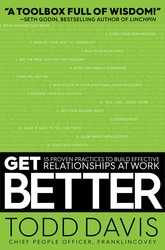 Get Better
by Todd Davis

A practical guide for anyone looking to create a competitive advantage in any size and type of organization by building effective relationships—from the performance improvement experts at FranklinCovey.In Get Better: 15 Proven Practices to Build Effective Relationships, FranklinCovey’s Chief People Officer Todd Davis explains that an organization’s greatest asset isn’t its people; rather, it’s the relationships between its people that is the greatest predictor of personal effectiveness. In the end, employees’ ability to build and sustain great relationships is an organization’s ultimate competitive advantage. Ideal for professional people at all levels of business, government, and education, from the front-line supervisor to the president and CEO, Davis describes the most common relationship pitfalls that negatively affect personal careers and organizational results. Get Better draws on real-world stories in an approachable, engaging style—and Davis’s thirty-year experience observing, leading, and coaching others brings those relatable experiences to life. He identifies fifteen proven practices that influential leaders at any level of an organization use to take ownership of their work, improve the quality of interactions with others, and master the skills of effective relationships.