Sixties pop culture would never have been the same without confused college graduate Benjamin Braddock, New York socialite Holly Golightly, rough-and-tumble marshal Rooster Cogburn, or Rosemary Woodhouse, who’s beginning to have terrible suspicions about her husband and her creepy neighbors. Roman Polanski’s Rosemary’s Baby is one of the most faithful of adaptations (Ira Levin modeled his Gothic apartment building on the real-life Dakota in New York City), while the movie Breakfast at Tiffany’s bears little resemblance to the much darker Truman Capote novel it’s based on.

You can stream these ’60s films, as well as The Graduate, True Grit, Born Free, The Hustler, Valley of the Dolls, and The Longest Day on Netflix right now (availability subject to change) or grab a copy of the books that inspired them. 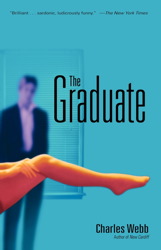 The Graduate
by Charles Webb

The basis for Mike Nichols' acclaimed 1967 film about Benjamin Braddock, a naive college graduate who drifts into an affair with an older woman. Webb's classic novel captured the uncertainty and jarring cultural shifts of the 1960s, as did the film, which made a star out of Dustin Hoffman and gave us the unforgettable "Mrs. Robinson" by Simon & Garfunkel.

Breakfast at Tiffany’s
by Truman Capote

In this seductive, wistful masterpiece, Truman Capote created a woman whose name has entered the American idiom and whose style is a part of the literary landscape. Holly Golightly knows that nothing bad can ever happen to you at Tiffany's; her poignancy, wit, and naïveté continue to charm.

Levin's chilling 1967 thriller about a woman who discovers that she's carrying the devil's child became the classic 1968 horror film directed by Roman Polanski and starring Mia Farrow as Rosemary, with Ruth Gordon winning an Oscar for her role as a Satan-worshipping granny. A recent miniseries starring Zoe Saldana couldn't touch the novel or the film.

Valley of the Dolls
by Jacqueline Susann

The Hustler
by Walter Tevis

Tevis's acclaimed 1959 novel—the first ever about the competitive billiards world—became the iconic 1961 film starring Paul Newman as "Fast" Eddie Felson, a pool shark who meets his match in legendary player Minnesota Fats. "If Hemingway has the passion for pool that he had for bullfighting, his hero might have been Eddie Felson," Time noted in its review. The Longest Day
by Cornelius Ryan

Cornelius Ryan's painstakingly detailed account of D-Day recreates the fateful hours leading up to the massive invasion of Normandy and the epic battle that turned the tide in favor of the Allies.This book, first published in 1959, became an all-star Hollywood epic in 1962 headlined by John Wayne, Robert Mitchum and Henry Fonda.

In her inspirational 1960 memoir, Adamson tells the story of how she and her husband adopted an orphaned lion cub they named Elsa, raised her, and then successfully released her back into the wild. The hit 1966 movie also featured the Oscar-winning and chart-topping song ("Born Free") by John Barry.