When people ask me how I got the idea for my debut novel, Contrition, I can’t really explain it, but I think it started with my desire to find a great place to write. The challenge was, the place I had in mind is inaccessible by definition: a religious cloister where nuns intentionally separate themselves from the world to focus on prayer.

Contrition tells the story of Dorie McKenna, a journalist and adoptee who discovers that she has a twin sister, Catherine, who is both a world-class painter and a cloistered nun under a vow of silence. I used to joke that I wanted to become a nun because the cloister seemed like it would afford plenty of quiet time for writing and making art. What I learned when I began researching cloisters was that nuns are extremely busy. Most cloistered orders spend up to seven hours a day in prayer, another five working in whatever industry supports their community, and only have one hour for recreation and socializing in the evening. So much for free time.

While a cloister didn’t turn out to be the right spot for a writer who loves her sleep, I knew it could work for my character, Sister Catherine, so long as she liked to paint in the middle of the night. But in order to accurately portray Contrition’s conflict between the journalist’s desire to introduce her twin’s artistic genius to the public and the nun’s desire to paint only for God, I needed to learn a lot more about cloistered nuns than I could find in books and online.

Since cloistered nuns don’t typically interact with the public, I had to find ways to research and speak to them without being invasive. Most cloistered orders don’t offer retreats or guest accommodations, but many orders of monks with similar work/prayer schedules do. I made several weekend retreats at male monasteries in California: I took contemplative walks, walnut shells crackling underfoot, through the orchards and vineyards of the Abbey of New Clairvaux in Vina; admired the simple elegance of the ceramics at St. Andrew’s Abbey in Valyermo; and stood agog at the New Camaldoli Hermitage in Big Sur, where the breathtaking landscape served as the basis for Sister Catherine’s fictional cloister home in the novel, the Monastery of the Blessed Mother. I spoke to as many monks as possible and attended all of their daily prayer services, collectively termed the Divine Office, including those in the middle of the night, to get a sense of the rhythm of monastic life.

To experience the cloistered nuns’ daily prayers despite being unable to stay overnight on retreat, I spent entire days at the Monastery of the Angels, a cloister just a few blocks from the Sunset Strip in Hollywood. I would attend the nuns’ prayers of the Divine Office from the public side of the chapel and then sit in my car or in their public garden, writing and eating the pumpkin bread they sold in their gift shop until it was time for the next scheduled prayers. But I had yet to speak to a cloistered nun.

Then I discovered the Office of Vocations at the Archdiocese of Los Angeles, an organization dedicated to promoting Catholic vocations to all types of religious orders. There I met the outgoing, warmly funny Sister Kathleen Bryant, a Religious Sister of Charity, Vocation Director, and self-proclaimed Talent Scout for God. I immediately began participating in the programs she organized for men and women considering religious life, explaining that I was not there as a candidate but as a novelist doing research.

The vocation seminars and retreats proved fascinating and wide-ranging. One seminar on celibacy was led by a priest so gorgeous that I half suspected Sister Kathy had hired an out-of-work model in order to test the attendees’ resolve to lead a celibate life. At a silent Vocation Discernment Retreat at the historic Old Mission Santa Barbara, more than a few people couldn’t stop talking. As I got to know some prospective nuns at the vocation events, what struck me the most was how “normal” they were. These were computer programmers, divorcees, and marketing specialists leading regular, albeit mindful, lives who were now considering making an extraordinary shift. It made me realize that the nuns inside the cloister had also likely once been just like me, which made it easier to portray my religious characters as real people rather than gauzy, spectral images of perfect holiness. Yes, they were holy, but they were also human and relatable.

At this point, I had succeeded in meeting women who were considering the vocation but still wondered if I would ever get to speak to cloistered nuns themselves. I thought about calling the cloisters and asking to interview some of the nuns, but novel research seemed too frivolous a reason to interrupt their sacred practice of prayer and work. And, despite my finding the prospective nuns so relatable, I was still intimidated at the thought of speaking to an actual, bona fide cloistered nun on my own.

Finally, the opportunity to meet the nuns both with a good reason and the support of other women arrived. One day a year, the Office for Vocations hosts an event for people interested in joining a particular religious community to visit and speak with its members, even if that community is cloistered. I attended two years in a row, visiting with the Dominican sisters at the Monastery of the Angels in Hollywood and with the Carmelite sisters at the Carmel of St. Teresa in Alhambra. In addition, two of my fellow attendees at the silent retreat at Old Mission Santa Barbara organized a meeting with the Franciscan Poor Clare nuns, whose cloister is a few hundred yards away from the Mission and whose lovely chapel was part of the inspiration for the cloister chapel in Contrition. Years later, I found an order of contemplative sisters offering retreat accommodations and stayed with these Benedictine nuns at their Abbey of St. Walburga in Virginia Dale, Colorado, where I was impressed by their wit, generosity, and occupation as cattle ranchers.

Whenever I found myself sitting across the metal grille from cloistered nuns in a convent’s parlor, I listened intently to the prospective candidates’ questions and the nuns’ answers. I again explained that I had come to research a novel. The sisters were happy to speak to me, partially because a couple of them said that based on my questions, they thought I might have a real vocation after all. I was single at the time, so that unnerved me. One order even included me in their invitation to prospective candidates to spend two weeks inside the cloister working and praying with them to try out monastic life.

After considering the possibility, I concluded that I did indeed feel a call, but it was to write Contrition, not to become a nun. While two weeks inside the cloister would have helped my research tremendously, I felt it would be too invasive to participate in that way. My character, Dorie, however, has no qualms about it and goes inside the cloister for a two-week trial visit in Contrition.

If I had any doubts about my vocation, I needed only to reflect upon the week when, a few days after attending the silent retreat at Old Mission Santa Barbara, I took a much different trip to the Tease-O-Rama burlesque convention to do research for a screenplay. Given how much I enjoyed both of those extraordinary adventures, I concluded that I’m not nun material after all, but a writer.

I’d like to thank all the men and women religious who shared their experiences with me. I hope Contrition paints an accurate picture of monastic life, a life I respect and admire even more after conducting my research. I’m also grateful to the prospective candidates who let me join them for part of their spiritual journey. I often wonder if any of them did become nuns. If so, I hope they tell their stories someday. 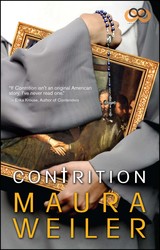 In this sweeping, heart-wrenching, and inspiring tale, twin sisters separated at birth reconnect through art, faith, and a father who touched the world through his paintings.When journalist and adoptee Dorie McKenna learns that her biological father was a famous artist, it comes with another startling discovery: she has a twin sister, Catherine Wagner, who inherited their father’s talent. Catherine is a cloistered nun with a vow of silence who adamantly refuses to show or sell the paintings she dedicates to God. Will they remain side-by-side for the rest of their lives, or will their conflicts change the course of the future?