As the #1 New York Times bestselling author of several novels, including the nail-biting new outbreak thriller Red Hill, author Jamie McGuire knows a few things about what we everyday people may do, say, think, and feel during end times. Here she shares with us her favorite end-of-the-world-as-we-know-it movies. Happy Halloween viewing!

10. The Postman
Most people I know didn’t care for this movie, but I watch it anytime it’s on television. Pretty sure I owned the VHS tape at one point in time. It’s one of those feel-good movies that leave you feeling not only hopeful, but patriotic, too.

9. The Matrix
One of two movies I’ve ever watched, bought another ticket, and immediately watched again. Amazing.

7. Logan’s Run
I’m showing my age here, and sure, the special effects are outdated, but it’s a brilliant concept.

6. 28 Days Later
So, so scary. Fast zombies are the worst! And the rabies explanation? Intense!

5. The Road
I thought about this movie for literally months after I saw it. It was so disturbing and realistic. It was probably so disturbing because it was so realistic!

4. I Am Legend
OK, so technically this movie could be about vampires, but it’s an interesting vampire/zombie hybrid that hasn’t been done before. The barren landscape is amazingly done.

3. World War Z (TIE)
This movie never stops. I have a hard time believing anyone could survive fast zombies, especially if the turn rate was twelve seconds, but it sure is edge-of-your-seat entertaining!

3. Dawn of the Dead
This is the movie that really got me thinking about what I would do in the event of a viral outbreak. Especially the first day is so realistic and catastrophic. It’s exactly how it would go down and definitely influenced Red Hill.

2. After Earth
Just, damn. I probably cried 15 times during this one! The father-son element was so powerful, and Will Smith having to rely on his young son to save them had the same urgency and panic that Scarlet felt in Red Hill.

1. Shaun of the Dead
Best zombie movie of all time! Laughter, tears, scary moments… it has it all.

Jamie McGuire is the New York Times bestselling author of five other novels: Walking Disaster, Beautiful Disaster, Providence, Requiem, and Eden. She and her husband, Jeff, live with their children just outside Enid, Oklahoma, with three dogs, six horses, and a cat named Rooster. Please visit her at JamieMcGuire.com. 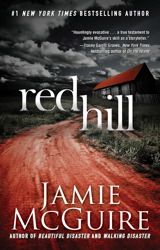 When the world ends, can love survive? For Scarlet, raising her two daughters alone means fighting for tomorrow is an everyday battle. Nathan has a wife, but can’t remember what it’s like to be in love; only his young daughter Zoe makes coming home worthwhile. Miranda’s biggest concern is whether her new VW Bug is big enough to carry her sister and their boyfriends on a weekend escape from college finals. When reports of a widespread, deadly “outbreak” begin to surface, these ordinary people face extraordinary circumstances and suddenly their fates are intertwined. Recognizing they can’t outrun the danger, Scarlet, Nathan, and Miranda desperately seek shelter at the same secluded ranch, Red Hill. Emotions run high while old and new relationships are tested in the face of a terrifying enemy—an enemy who no longer remembers what it’s like to be human. Set against the backdrop of a brilliantly realized apocalyptic world, love somehow finds a way to survive. But what happens when the one you’d die for becomes the one who could destroy you? Red Hill grabs you from the first page and doesn’t let go until its stunning conclusion. This is #1 New York Times bestselling author Jamie McGuire at her unforgettable best.