It’s important for us, as a society, to use gender-friendly language when we’re talking about partners. Lee Airton, author of GENDER: YOUR GUIDE, discusses the terminology and phrases you should use!

While many people choose gender-neutral terms like partner when talking about their own relationships, a gender-friendly practice is using gender-neutral language when you ask or speak about others’ relationships. For example, let’s say your acquaintance mentions they’re going on a date or seeing someone, but doesn’t offer any other information. A classic experience of many non-heterosexual men is people automatically using she/her pronouns to refer to that someone, and vice versa for non-heterosexual women. This is frustrating because it presumes that anyone they’d be dating is necessarily of the “opposite sex,” or that the person is necessarily straight. In these instances it’s more gender-friendly to use singular they and gender-neutral terms for others’ unspecified partners or dates. This doesn’t tell them who you think they are, which in this case means who you think they should desire or date. Using gender-neutral language also holds open the possibility that their partner or date is a non binary person. As you know by now, this might just be the case!

So, here’s the tip, condensed: when asking or talking about another person’s special someone, use gender-neutral language until you have more information. This means using partner, date, “person you’re seeing,” they/them, etc. You’ll learn soon enough, by listening and mirroring a person’s own language use, which terms are warranted. Here are some extensions of this tip:

To learn more about Gender pick up a copy of GENDER: YOUR GUIDE by Lee Airton!

For more on Tips on Life & Love: Janet Mock: How I Came Out as a Transgender Woman

Excerpted from Gender: Your Guide by Lee Airton. Copyright © 2018 by author. Used by permission of the publisher. All rights reserved. 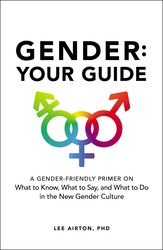 Gender: Your Guide
by Lee Airton

The days of two genders—male, female; boy, girl; blue, pink—are over, if they ever existed at all. Gender is now a global conversation, and one that is constantly evolving. More people than ever before are openly living their lives as transgender men or women, and many transgender people are coming out as neither men or women, instead living outside of the binary. Gender is changing, and this change is gaining momentum.

We all want to do and say the right things in relation to gender diversity—whether at a job interview, at parent/teacher night, and around the table at family dinners. But where do we begin?

From the differences among gender identity, gender expression, and sex, to the use of gender-neutral pronouns like singular they/them, to thinking about your own participation in gender, Gender: Your Guide serves as a complete primer to all things gender. Guided by professor and gender diversity advocate Lee Airton, PhD, you will learn how gender works in everyday life, how to use accurate terminology to refer to transgender, non-binary, and/or gender non-conforming individuals, and how to ask when you aren’t sure what to do or say. It provides you with the information you need to talk confidently and compassionately about gender diversity, whether simply having a conversation or going to bat as an advocate.

Just like gender itself, being gender-friendly is a process for all of us. As revolutionary a resource as Our Bodies, Ourselves, Gender: Your Guide invites everyone on board to make gender more flexible and less constricting: a source of more joy, and less harm, for everyone. Let’s get started.