I didn’t exactly set out to become an alcoholic. I was never a party girl, nor a person who hung out in bars. I was, in fact, a relatively normal, educated woman who, after a painful divorce, became a single mother to two toddlers and developed a pretty serious case of insomnia.

One night after the kids had gone to bed, I was so desperate for rest that I picked up a glass of wine, thinking it just might help me relax enough to fall asleep. It did the trick, and over the course of a year, one glass slowly and insidiously morphed in to a bottle a night — sometimes two. I didn’t understand how easily I’d build up a physical tolerance to alcohol, or how quickly I’d become mentally dependent on the ritual of drinking. I hid behind the cultural acceptance of alcohol, joking with my girlfriends about “Mommy’s Little Helper” and the “Wine with Dinner Hour” with the kids.

Eventually, drinking caused enough wreckage in my life that I sought treatment. I’ve been sober almost six years now, and looking back, here are a few of the warning signs I wish I hadn’t missed along the way:
1) Watching the clock. Back when I heard the word “Mommy” repeated approximately 9,000 times a day, I found myself fantasizing about the glass of wine I would have at 5:00. I imagined every cell in my body exhaling with that first sip. I left work on a mission to pick up the kids from daycare and get home so I could pop the cork and watch the ruby-hued liquid spill into my glass, its heady scent rising up and making me feel weak. If you’re dwelling on the moment you can finally indulge, it could be a good idea to ask yourself why.

2) Making rules. I’ll only drink after 5:00 or after the kids have gone to bed. I’ll only have beer or wine — never hard liquor. I’ll have a glass of water for every drink I take. I’ll only get drunk on the weekends. These are only a few of the “rules” I made up for myself that allowed me to slowly rationalize my way into a problem. I didn’t realize that I created these mental constructs in order to make myself believe I had my drinking under control. I didn’t realize that in having to control my drinking, it was gradually taking control over me.

VIDEO: Amy Hatvany on drinking and recovery, the writing process

3) Sneaking. When I was eleven, I hid Snickers bars and Laffy Taffy in a box beneath my bed. Twenty years later, there was a back-up bottle of vodka in my freezer, shoved behind the super-sized bag of chicken nuggets for the kids. I drank a glass of wine before heading to a friend’s for dinner, knowing that the one or two I’d be served while I was there wouldn’t quite be enough to take the edge off. I poured wine into a coffee mug at two o’clock on a Sunday afternoon so my neighbors wouldn’t suspect I was having a drink while my children played in the yard. If your drinking becomes something you keep a secret, the question then becomes: what is it that you’re actually hiding from?

Having a drink can seem like an easy escape. It’s a way we, as stressed-out mothers, can give a moment of relaxation to ourselves without bothering anyone else. It’s a way we connect with other people, a way to celebrate our joy and drown our sorrow. Not everyone is genetically prone to alcoholism, and having the occasional drink certainly isn’t something to worry about. But if you find yourself drinking more than you think you should, or even dancing around some the behaviors I’ve listed, it couldn’t hurt to step back and ask yourself if alcohol is becoming something you need versus something you want.

Not sure if your drinking is a problem? Learn more:
—Facts about Alcohol and Your Health
—Dr. Oz on How to Spot Addictions
—5 Ways to Sleep Better Tonight
—4 Holistic Health Practices to Try 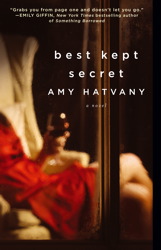 Heartbreaking, haunting, and ultimately life-affirming, Best Kept Secret is more than just the story of Cadence—it’s a story of how the secrets we hold closest are the ones that can most tear us apart.