Acceptance helps. And it doesn’t mean approving, giving up, or detaching; it means recognizing things for what they are. It’s a little bit of peace within us–no matter what else is going on. From Beyond Addiction: How Science and Kindness Help People Change.

We may not like the truth, but it’s true anyway. This is not meant to sound harsh. It’s to give you permission to stop fighting so much and show you to a calm place in the eye of the storm: acceptance is a little bit of peace within us no matter what else is going on. Consider how differently your blood pressure reacts to “So, this is what’s happening . . . ” as opposed to “I CAN’T BELIEVE IT, WHY IS THIS HAPPENING TO ME?!”

And this is a skill you can learn. The alternative—not accepting painful reality—adds avoidable suffering—hostility, resentment, and alienation—to unavoidable pain.

Rebecca was a twenty-one-year-old who had been in treatment several times for abusing multiple substances. In early treatment her underlying psychiatric issues were not adequately addressed; as a result she struggled to stay sober and frequently relapsed. At the time, Rebecca lived with her mother, Maggie.

When the two of them first came to CMC, Maggie appeared ragged. She described crying every day and staying up at nights praying for her daughter. She was miserable when her daughter talked to her about her life, and terrified when she didn’t. She frequently pleaded and shouted, while her daughter retreated behind closed doors. In her attempt to be heard and understood, Maggie pleaded and shouted more.

In discussion with her therapist, Maggie acknowledged that she had so desperately wanted things to be different that she hadn’t noticed she’d abandoned many of the activities she used to enjoy; the same activities she required if she was going to manage her anxiety. With her life on hold, she hadn’t been riding her bike or talking to her sister, who had previously been a source of support. Maggie had been unaware, too, that venting her worries to her daughter was pushing her away.

Rebecca told her own therapist that she felt overwhelmed by her mother’s feelings. She knew quite well that her mother was disappointed in her. Hearing it more didn’t help her know it better. Maggie agreed to try for one month not to talk to her daughter about how she wished things would be. Instead, she would focus on what she could do for herself.

She committed to getting back on her bike for daily rides and to calling her sister to catch up at least once a week. She tracked these activities as well as her moods and energy levels and over the month she found that the exercise of riding her bike helped her to sleep instead of worry and cry. Talking to her sister, Maggie noticed, helped keep things in perspective, and given her sister’s understanding, she didn’t feel so desperate to get it from Rebecca.

Maggie told her therapist that she hadn’t so much gotten her life back as realized that this was her life. She still worried about Rebecca and wanted to help as much as she could, but she was increasingly accepting that this was a part of her life—though not everything. Indeed, as Maggie paid attention to her own changes and gave her daughter more space, her daughter began to spend more time outside her room and volunteer more information when they were together. 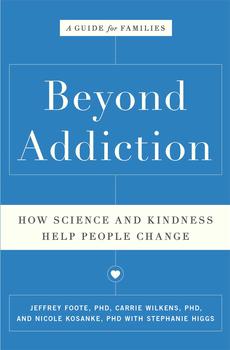 Delivered with warmth, optimism, and humor, Beyond Addiction defines a new, empowered role for friends and family and a paradigm shift for the field. Learn how to tap the transformative power of relationships for positive change, guided by exercises and examples. Practice what really works in therapy and in everyday life, and discover many different treatment options along with tips for navigating the system.