Inspired by the outpouring of love at the 25th anniversary screening of The Princess Bride, Cary Elwes, who played the dashing Westley, has written As You Wish, a lovely book on the making of the beloved 1987 fantasy film. Like the movie itself, the book is charming, funny, and clearly a labor of love. In it, Elwes shares some of these hilarious behind-the-scenes anecdotes.

Westley’s broken toe
Elwes unwisely tried out Andre the Giant’s ATV and broke his toe, then tried to keep it a secret from director Rob Reiner. There was no chance of Reiner replacing Elwes, like all the other actors, he was the director’s first and only choice for the role. But filming was a bit tricky with a broken toe. In the scene where Buttercup learns Westley is still alive, you can see him favoring his left foot as he sits down and gets up.

Reiner was disappointed in the epic swordfight at first
Elwes and Mandy Patinkin had trained nonstop for weeks with the finest swordsmen to be ready for “The Greatest Swordfight in Modern Times.” Despite Elwes’s broken toe, he was game. But when he and Patinkin first ran through the fight, it was only about a minute. Reiner disappointedly asked the crushing question, “Is that it?” They had to improvise and extend the scene, but by then, they were so adept, they were up for the task. Reiner is still proud that every moment in the fight (except for the acrobatic flips) is his two actors, with no stand-ins.

Patinkin bruised a rib trying not to laugh at Billy Crystal’s ad libs.
One of the more unusual injuries on the set was when Patinkin was so determined not to ruin a take by laughing at Crystal’s performance as Miracle Max, that he actually bruised a rib.

Andre the Giant’s immovable feast
Andre the Giant was a man of immense appetites: He could easily down 3 bottles of cognac and 12 bottles of wine and just be “a little tipsy,” Elwes recalls. To deal with his chronic back pain from years in the ring, he drank. A lot. In fact, the night after the table read, Andre drank so much that he passed out in the lobby and the hotel management wisely decided to leave him be and merely put a velvet rope around him, letting him sleep it off. And he wasn’t even staying at that hotel!

The “perfect” kiss required six takes
The “perfect kiss” between Westley and Buttercup was perfect on the first take, or so thought the director, who said, “Cut. Print.” But his stars didn’t agree and demanded five more takes, Elwes writes, because, yes, the chemistry between him and Robin Wright was not just movie magic. 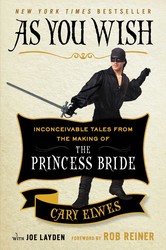 As You Wish: Inconceivable Tales from the Making of The Princess Bride
by Cary Elwes

From actor Cary Elwes, who played the iconic role of Westley in The Princess Bride, comes a first-person account and behind-the-scenes look at the making of the cult classic film filled with never-before-told stories, exclusive photographs, and interviews with costars Robin Wright, Wallace Shawn, Billy Crystal, Christopher Guest, and Mandy Patinkin, as well as author and screenwriter William Goldman, producer Norman Lear, and director Rob Reiner.The Princess Bride has been a family favorite for close to three decades. Ranked by the American Film Institute as one of the top 100 Greatest Love Stories and by the Writers Guild of America as one of the top 100 screenplays of all time, The Princess Bride will continue to resonate with audiences for years to come.Cary Elwes was inspired to share his memories and give fans an unprecedented look into the creation of the film while participating in the twenty-fifth anniversary cast reunion. In As You Wish he has created an enchanting experience; in addition to never-before seen photos and interviews with his fellow cast mates, there are plenty of set secrets and backstage stories.With a foreword by Rob Reiner and a limited edition original poster by acclaimed artist Shepard Fairey, As You Wish is a must-have for all fans of this beloved film.