An important part of life is taking risks, even when the path seems unclear. The journey through a new idea, whether it’s business related or more personal, is a great opportunity to learn more about yourself and the people around you. Build your network, work hard and most importantly, believe in yourself. Joy Mangano, author of INVENTING JOY, shares her reasons as to why carving your own path is vital to living a happy a full life.

Just because something has never been done before, doesn’t mean it can’t be done. If your idea is something new and different, you probably won’t find a well-worn path that leads to its creation. But that’s okay. That’s how a creative life works.

You’ve got to carve your own path.

Sometimes, we can get boxed in by what’s expected of us. My mother Toots, for instance, grew up in a tradition that called for her to get mar- ried, have children, and tend to her family. And Tony’s father Joe was expected to follow in the family tradition and become a banker. His life was totally laid out for him.

But after my parents separated, my mother carved a brand-new path for herself, as a working woman. And my father-in-law Joe never became a banker—he carved his own path in the field of the arts and lived his own definition of success.

Trying something new and daring in our lives can lead us to feel unstable and a little out at sea—but that’s okay. We need to embrace that feeling because it is proof that we’re growing and fighting and dreaming and daring to follow a path of our own.

As an inventor, I’ve never believed that just because something doesn’t exist, it can’t. And I’m not just talking about inventing products. I’m talking about inventing our lives. There is no set path for any of us. We can break with tradition, try new challenges, and see where that takes us. Because the key to a joyful life is not following the path that’s been traveled a million times before. The key is carving our own path. 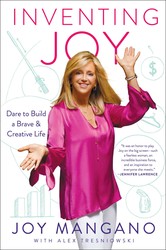 NATIONAL BESTSELLER “It was an honor to play Joy on the big screen—she’s such a fearless woman, an incredible business force and an inspiration to everyone she meets.” —Jennifer Lawrence From Joy Mangano, self-made millionaire, entrepreneur, inventor of the Miracle Mop and inspiration behind the acclaimed film Joy starring Jennifer Lawrence comes a breakthrough story of love and hope that will unlock the best and brightest version of you.Joy’s rise from single mother of three to the nation’s most celebrated female inventor is truly what dreams are made of. Full of twists and turns, work and love, obstacles encountered and overcome, Inventing Joy is a binge-worthy book in every aspect. Dive in and be swept along for the ride as she relives her incredible and inspiring journey to joy. But there’s more. Throughout her inspirational rags-to-riches story, Joy points out her very own personal light-bulb moments—lessons that she learned the hard way, and principles she still relies on today.