By Pat Tucker
Author of Sideline Scandals
It’s that time of year again. If your loved one lives for gridiron action, this may as well be Christmas! Kickoff off the new NFL season is upon us, and since more family members are tuning in to the game, a quick crash course will help you both on and off the field.

Off the Field
Start early. Look for Football 101 workshops specifically for women. Most major cities offer these workshops; if none are offered in your city, there are tons of websites that focus on the game. They run the gamut from the very basics to the most complex.

Dress the part. The growing pool of female fans has resulted in fashionable NFL fan gear made specifically for women. Gone are the days of drowning in his baggy, over-sized jersey. From Victoria’s Secret’s NFL line to each of the teams and the NFL.com, you can represent your team with the style of a serious fashionista.

Follow the crowd. Regardless of where you watch the game, this is when you absolutely want to be a conformist. The cardinal rule to remember: Once kickoff happens, hold your rookie questions. This is the time to pick a team and enjoy the sounds, groans, and screams as fans cheer on their team. Even if you’re unsure of what’s going on, just join the crowd and have a blast.

On the Field
Run up the score. Players score a touchdown, which equals six points. The team scoring a touchdown is given the bonus of trying to add one (by kicking the ball through the goal posts) or two more points. Two points are called extra point conversion attempts. Instead of kicking after the touchdown, offense gets another chance to make it into the end zone for two points. A safety (a player with the ball is tackled in his own end zone) is worth two points.

Flag on the play. This is when two colors really matter: yellow and red. When a yellow flag is thrown, that means the referee is calling a foul on that play. If the coach throws a red flag, this is called a “coach’s challenge,” and it means he disagrees with the referee’s call. If the coach is correct, it’s all good. If he’s wrong, that coach and his team are charged with a timeout.

Respect the game. This isn’t the time for any kind of deep, thought-provoking conversation. Game time is just that, game time. If you want your fellow viewers to weigh in or offer feedback, it’d better be about the game and the favorite team, or it needs to wait.

Get great recipes. Find help managing your life. Have a happy marriage. Sign up for our newsletter! 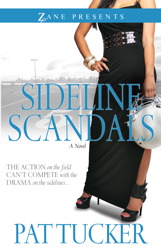 The game’s afoot once again in this sizzling sequel to Football Widows, with new members and new drama, courtesy of the women behind the NFL’s biggest stars, and play is getting dirty on and off the field... Sasha Davenport is riding her popular Football Widows social club all the way to the top. She’s got the right look, the high-profile job, and a glamorous public image that belies all her previous salacious activities. The one thing that eludes her is the star player she needs to complete the cast of her made-for-reality TV life. Los Angeles Sea Lions NFL wife Tatayna Bacall has been faking enthusiasm for the game for too long. Now she wants her star quarterback husband to find a job as a sports analyst so their life can take on some kind of normalcy. Joining the Football Widows Club gives her hope that there is life outside the huddle. But when Tatayna realizes that her husband is a target, she’s ready to break the rules with some foul plays of her own…