Decisiveness is a vital skill for all people holding leadership positions. This skill can be a challenge because there’s often little time to examine all of the possibilities thoroughly.  Lea Berman and Jeremy Bernard, author of TREATING PEOPLE WELL, share suggestions for how to act decisively.

The Obamas decided from the start of the administration that they would have a different take on the social arena and not participate in the DC social scene as many of their predecessors had done. Instead, they put a clear emphasis on kids—both their own and others.

On most nights, the president sat down to dinner with his family at 6:30 p.m., a deliberate effort to create a sense of normalcy and stability for his daughters. As Valerie Jarrett, a senior advisor to President Obama, told the History Channel, “By six-fifteen, I’m looking up at the clock and going, ‘We better wrap it up here,’ because [Michelle] will not hold dinner. She doesn’t want to make the children sit there and wait for him. And he respects that. And I think something as simple as that, to create this sense that the children are the most important thing in their life, even though he has the most powerful job in the world, is really important.”

The Obamas also put a lot of effort into having schoolchildren from the region visit the White House. Holidays like Halloween became an official staple event, with local students coming to the White House for trick-or-treating. It was a conscious and unmistakable decision that their focus was going to be different from that of other administrations.

Decisiveness is a critical leadership skill, but it can be challenging to put into practice. We rarely had a moment to mull over our decisions, and that’s not unique to the White House; most of us hurtle through life without time for thoughtful consideration about our choices.

When faced with a decision, it’s important to examine the possibilities thoroughly, consider the potential negative effects (and how you will deal with them), but don’t dither once you know what needs to be done. The failure to make a decision is a decision. When people—especially bosses—waver about what to do, they inject stress into the situation and cause people to question their judgment because they are clearly not sure of it themselves. Indecisiveness can cause existing problems to fester and grow, creating a whole new set of issues to resolve. Social secretaries know how to make things happen quickly: there aren’t many procrastinators among us because wasting time was a luxury we never had.

Here are some suggestions for how to act decisively:

Give a deadline for providing input. When you need to make a decision at work, listen politely to your colleagues’ ideas and concerns, but don’t commit to anything before you’ve weighed all your options. Once you’ve chosen a path, make it clear that the decision cannot be revisited.

Share your conclusion. In this way, everyone has the same information you do. State what you’re doing in the positive, even if the decision you’re making is the result of a setback or failure. If you have a change of heart over a pending deal with a client, let her know as soon as possible. It’s unprofessional to leave her hanging and holds up her choices about what to do next.

Stick to it. Being capricious is costly, both financially and in terms of personal reputation. That doesn’t mean you shouldn’t make changes when you see that something isn’t working, but have the courage to give your choices a chance. We’ve both hired staff for whom we had high hopes, only to be disappointed at first. We didn’t give up on them; we pointed out what was lacking and reminded them of our expectations. Usually the extra attention and patience paid off, and we were rewarded with valued team members.

Start with small decisions at home. For example, what color to paint your bedroom. Give yourself a time limit—say, fifteen minutes—to make your choice. Then move on to larger decisions, like where to go on summer vacation or what to get your significant other for his or her birthday, breaking these decisions up into parts at first if you get stuck. You’re building the skills to make larger and more significant life decisions more comfortably and confidently.

If you enjoyed this sneak peek, why not start at the beginning? Listen to the Introduction now.

How to replace judgement with love. 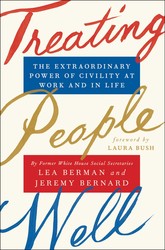 A guide to personal and professional empowerment through civility and social skills, written by two White House Social Secretaries who offer an important fundamental message—everyone is important and everyone deserves to be treated well. Former White House social secretaries Lea Berman, who worked for George and Laura Bush, and Jeremy Bernard, who worked for Michelle and Barack Obama, have written an entertaining and uniquely practical guide to personal and professional success in modern life. Their daily experiences at 1600 Pennsylvania Avenue taught them valuable lessons about how to work productively with people from different walks of life and points of view. These Washington insiders share what they’ve learned through first person examples of their own glamorous (and sometimes harrowing) moments with celebrities, foreign leaders and that most unpredictable of animals—the American politician.