Feminism and gender equality are topics we should educate everyone at a young age about. If children are taught growing up that everyone deserves respect and fairness, then these beliefs will stick into adulthood. Soraya Chemaly, author of RAGE BECOMES HER, shares her views on ways parents can raise feminist boys.

For many people “feminist” means “woman” when, in fact, it simply means believing that women are equally human and deserving of human dignity and rights.  For girls, feminism is often a lifeline, validating their experiences and allowing them to make sense of the incoherence of sexism, racism and other forms of discrimination. It gives girls and women a sense of their own worth in a world in which we can’t take that worth or other people’s sense of it for granted.

There is nothing about feminism that excludes boys and men, all of whom can similarly believe in girls and women’s humanity at no cost to their own. Feminist fights, for example, for equal pay, fair and accurate media representations, freedom from the threat of violence, control over our own bodies and reproduction, parity in leadership – can be supported by boys and men equally.  The problem comes when women’s gains are portrayed as coming at men’s expense. For example, equal pay for women and women’s desire to participate as equals in political life is sometimes interpreted as “taking jobs from,” or “oppressing” men, both expressions of entitlements rooted in the idea that men deserve or have greater need of jobs and leadership, as a function of masculinity and masculine prerogatives.

A major problem facing parents today is raising children in an environment that asserts that feminism represents an assault on boys and men, a message we regularly hear from politicians, educators and media. This is a dangerous distortion of what feminism means and one that simultaneously hurts boys and men by doubling down on rigid norms of masculinity.

Feminism is not a movement against boys and men, but against the toxicity of gender binaries, male dominance, masculine entitlements and privileges. This is an important distinction and one that children, with a highly developed sense of fairness, can easily understand if explained to them.

To find out other ways to challenge society’s ideas on sex and gender, pick up a copy of RAGE BECOMES HER by Soraya Chemaly.

Also from Tips on Life & Love: Be Brave Enough to Stop Pleasing People 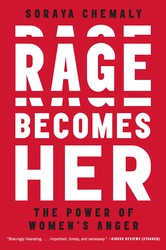 Rage Becomes Her
by Soraya Chemaly

“How many women cry when angry because we've held it in for so long? How many discover that anger turned inward is depression? Soraya Chemaly’s Rage Becomes Her will be good for women, and for the future of this country. After all, women have a lot to be angry about.” —Gloria Steinem A transformative book urging twenty-first century-women to embrace their anger and harness it as a tool for lasting personal and societal change. Women are angry, and it isn’t hard to figure out why. We are underpaid and overworked. Too sensitive, or not sensitive enough. Too dowdy or too made-up. Too big or too thin. Sluts or prudes. We are harassed, told we are asking for it, and asked if it would kill us to smile. Yes, yes it would. Contrary to the rhetoric of popular “self-help” and an entire lifetime of being told otherwise, our rage is one of the most important resources we have, our sharpest tool against both personal and political oppression. We’ve been told for so long to bottle up our anger, letting it corrode our bodies and minds in ways we don’t even realize. Yet our anger is a vital instrument, our radar for injustice and a catalyst for change. On the flip side, the societal and cultural belittlement of our anger is a cunning way of limiting and controlling our power. We are so often told to resist our rage or punished for justifiably expressing it, yet how many remarkable achievements in this world would never have gotten off the ground without the kernel of anger that fueled them? Rage Becomes Her makes the case that anger is not what gets in our way, it is our way, sparking a new understanding of one of our core emotions that will give women a liberating sense of why their anger matters and connect them to an entire universe of women no longer interested in making nice at all costs. Following in the footsteps of classic feminist manifestos like The Feminine Mystique and Our Bodies, Ourselves, Rage Becomes Her is an eye-opening book for the twenty-first century woman: an engaging, accessible credo offering us the tools to re-understand our anger and harness its power to create lasting positive change.