With so much negativity around politics these days, positivity may seem like an impossible dream. It’s easy to blame negativity on others, but when you know the natural negativity of the human brain, you can steer toward the positive zone. Here are three simple ways to start.

1. Broaden your historical perspective
Human beings have always dug in their heels over matters that seem trifling from a distance. We do this because our brain rewards social assertion with the good feeling of serotonin. You can easily see this in others, but it’s hard to admit to in yourself. All through human history, people have sought social importance because natural selection built a brain that makes it feel good. Even historians seek social importance, by presenting history in ways that appeal to your mammalian impulse to advance your social standing. Don’t believe people who tell you we’re at a turning point in history. Everyone who has ever lived has seen themselves at the pivot point of history because the brain interprets the world in reference to itself.

2. Define the greater good for yourself
You hear people invoke the greater good when they appeal for your support, and it can be tempting to go along if they present themselves as more informed, more ethical, or just more numerous. You can end up subordinating your good sense to the most negative person in the room. No one is an objective judge of the greater good because our brain evolved to focus on its own survival. Each brain defines the great good in ways that meet its own needs, despite grand rationalizations. Your conception of the greater good is biased, but so is everyone else’s. Do not believe you serve the greater good by joining in their negativity.

3. Recognize your mammalian urge for social support
Animals seek safety in numbers because it promotes survival. A gazelle who refused to run when its herd mates run would end up in the jaws of the predator. Mammals evolved a brain that rewards you with the good feeling of oxytocin when you stick with the group. Every mammal longs for greener pasture, of course, but your oxytocin falls when you’re isolated, and that motivates a return to the fold. Common enemies keep mammalian social groups together despite the obvious frustrations of herd following. It’s easy to accuse others of herd behavior, but if you are honest about your ups and downs, you will be surprised at the things you do to sustain the good feeling of group support.

4. Remember: Negativity is natural, but positivity is powerful
We have inherited a brain that goes negative easily. Our ancestors survived because they anticipated threats in time to protect themselves. Your brain is designed to scan for potential threats and respond quickly with a surge of cortisol (“the stress chemical”). You define threats with neural pathways carved by your own past cortisol surges. These cortisol pathways protect you from having to touch a hot stove twice, but they can also lead to a lot of stress.

It’s easy to say things are “going to hell in a handbasket.” The evidence seems to be everywhere, especially when you surround yourself with people who think this. It’s hard to notice the way your mind chooses its information. Our brain cannot process everything so it is designed to zoom in on things relevant to its survival. But it defines survival in a quirky way: it cares about the survival of your genes, and it relies on neural pathways built in youth.

Of course we don’t consciously focus on our genes or our youth. We simply surge with brain chemicals when a threat or opportunity appears, and that paves the pathways we see the world with. This is why threats to our social alliances feel like a matter of life and death. We respond with huge spikes of cortisol, which tell your brain to scan for danger. The result is more cortisol, and a vicious cycle.

You can build a new neural pathway to go positive instead of going negative. Just focus on positives for one minute, three times a day for 45 days. You may say it’s biased to focus on positives, but your negative lens is already biased and you are just providing correction. You may say it’s impossible to find positives in your awful life in these awful times and this awful world. That message will keep being produced by your old lens, but you can have a new lens in 45 days.

Each of us is born with billions of neurons but almost no connections between them. We build connections from experience, so each of us ends up with a slightly different lens. This makes it easy to see others as impossibly misguided. You free yourself from this negativity when you know that your own lens was build from accidents of experience.

The world looks less scary as your tolerance of others builds. You may insist that THEY need to be more tolerant, because your lens always sees THEM as the problem. Stress chemicals will fill your veins if you keep thinking that. You can enjoy a virtuous circle instead if you understand your lens and work to correct it.

The electricity in your brain flows like water in a storm, finding the paths of least resistance. That effortless flow of electricity creates the good feeling that you know what is going on around you. But the paths you’ve carved for your electricity got there by accidents of experience. These old roads feel safe because they were built by your past rewards and pain, so they give you the feeling that you can manage future rewards and pain. Departing from these old roads is hard because the electricity in your brain has trouble flowing down virgin neurons. You can boost your ability to carve those new roads, however, and feel powerful in a positive way. 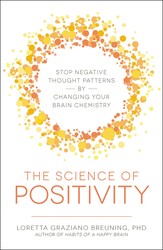 The Science of Positivity
by Loretta Graziano Breuning

Learn the scientific benefits of positivism! Sometimes it's easiest to look for the worst in every situation--our brains have evolved to scan for problems in order to help avoid them. But you can transcend this natural negativity--if you know how. The Science of Positivity teaches you how cynical thought habits are formed, and how you can rewire yourself to go beyond them. Neurochemical expert Loretta Graziano Breuning, PhD, empowers you to transcend negativity by creating new thought habits. You'll learn simple, practical actions you can take to shift your thinking to a way that causes your brain to reward optimism with the release of happy chemicals. You can even permanently replace cynical thought patterns with realistic and optimistic thoughts. In just minutes a day for six weeks, you will build new pathways to see the world in new ways. Frustration is an inevitable part of life, but rather than using cynicism to manage frustration, you can rewire your brain to get beyond it.