The list of reasons for divorce is, of course, endless, and it can be customized to suit your particular situation, says Stacy Morrison, author of Falling Apart in One Piece: One Optimist’s Journey Through the Hell of Divorce.

Since the night it all started to end, and the day, three years later, that we were pronounced divorced, I have unearthed and sampled and tried on and been offered at least 316 reasons why Chris and I didn’t make it. Many of the reasons for divorce would be familiar to anyone, divorced or not. They’re like Muzak you hear on the elevator: you didn’t even know you knew the tune until you catch yourself humming along. Here’s a sampling:

Reason #12: Because he is a total idiot, just like all the other guys my girlfriends know who simply can’t deal with grown-up life.

Reason #13: Because I married the wrong person. It was all a terrible mistake.

Reason #14: Because women just want to catch a man and change him and keep him from becoming his true, coolest self, so he has to bust out and be free.

Reason #15: Because he/she is not capable of having a relationship.

Then there’s Reason #16 (my go-to favorite, especially in the middle of the night): Because I am essentially unlovable.

Or Reason #101: Because he/she is and always has been a loser/jerk and I was an idiot ever to fall for him/her in the first place.

The list is, of course, endless, and it can be customized to suit your particular situation.

When I was still under the impression that I was happily married, I encountered a memorable case of someone who had framed her life in terms of Reason #102. I’d met this woman at a work event, and I spoke to her at some length. She was wearing a ring with a remarkable rose-colored oval diamond on her right hand. “Wow,” I said, “that’s a beautiful ring.” Without hesitating for a second, the woman presented the ring to me for my examination; the stone must have been at least 2 carats.

“Yeah, can you believe it?” she said. “Can you believe a man would love me enough to give me a ring like this and then leave me?”

I was startled by her instant revelation (and it’s pretty hard to startle me with that stuff, since I have so few boundaries myself) and by the intensity of her rancor. Wow, I thought, all that must have happened pretty recently for her to be so raw and be wearing the ring still.

She snorted. “Five years ago we married, and he left a year later. Can you believe it? Men are just unbelievable.”

He was four years gone and she was still bleeding like this, in public. She put that ring on every day and thought miserable thoughts about what she believed she’d been promised. It was impossible not to see that she was in love with her loss, in the same way she’d probably once been in love with her husband. By the time I walked away from her, her unhappiness and anger had settled on me like a fine dust blown in through the windows during a storm, and it took me a few days to shake it off. Months later, the woman and her ring came up in conversation with some friends, each of whom had been told the same story in the same manner by her at one time or another. It made my soul ache to think of someone being stuck in her life like that, forever tied to a single moment.

I desperately wanted not to turn out like her, not to hold on to the shell of what something had been as if the mere fact of it (and the artifacts of it, like that ring) somehow meant more than the feelings and the memories themselves. I wanted to dare to imagine myself whole again. 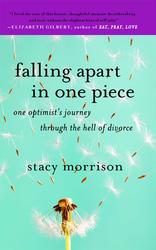 Falling Apart in One Piece
by Stacy Morrison

The emotionally charged story of a divorce that brought the surprising gift of grace Just when Stacy Morrison thought everything in her life had come together, her husband of ten years announced that he wanted a divorce. She was left alone with a new house that needed a lot of work, a new baby who needed a lot of attention, and a new job in the high-pressure world of New York magazine publishing. Morrison had never been one to believe in fairy tales. As far as she was concerned, happy endings were the product of the kind of ambition and hard work that had propelled her to the top of her profession. But she had always considered her relationship with her husband a safe place in her often stressful life. All of her assumptions about how life works crumbled, though, when she discovered that no amount of will and determination was going to save her marriage. For Stacy, the only solution was to keep on living, and to listen—as deeply and openly as possible—to what this experience was teaching her. Told with humor and heart, her honest and intimate account of the stress of being a working mother while trying to make sense of her unraveling marriage offers unexpected lessons of love, forgiveness, and dignity that will resonate with women everywhere.