By Matt Haig
Author of The Humans
As this is Halloween, I was going to write about witches and goblins and other terrifying creatures, but the truth is I am not very scared of these things. I tend not to believe in them. So I thought I’d write about things that scare writers. I have no idea if this is how other writers think, but I will speak for them anyway, because I haven’t eaten breakfast yet.

2. Amazon reviews. Now, listen, I am all for democracy. Democracy is great. And in many ways the Internet has made the world of books so much more democratic. Anyone who can spell their own name can now write an e-book and put it out there. Fantastic. Likewise, anyone who can read, can now write book reviews and post them in public. Equally fantastic. But as an author it is sometimes dismaying to realize you can now get one-star reviews simply for your book (which they haven’t read yet) being delivered two days late. My latest bad review gets marked down for being “too philosophical.” Yes. That’s bad. Thinking about stuff. I know I shouldn’t look, but I can’t help it.

3. Getting dropped. I am a writer. Being a writer means doing a job you have absolutely no control over. As a writer your name is on the cover and you get to write most of the words, but most of the important decisions and meetings happen without you being there. And so no writer ever feels fully secure, as they know that for every new novelist arriving onto the conveyor belt, another one drops off. And writers are generally people who are useless at anything else.

4. Events. I know, I know, it is a privilege for an author to go out and meet their readers, and a lot of events are wonderful. But the thing is, sometimes they are not. Sometimes you are just talking to three people, two of whom haven’t heard of you and are just resting their legs. Sometimes it is just hearing your own voice ramble on about something it has rambled on about 392 times before to people with faces that couldn’t look less enthused if they were watching someone unsuccessfully replace a light bulb for an hour or so.

5. Aging. I know, I know, everyone is scared of that. But for writers it is made worse by the knowledge that Shakespeare had written 30 plays by our age, and at least 29 of them were the greatest things ever written.

6. Spiders. OK, this is a bit conventionally Halloween-y, but to be a writer you need to be completely unheroic when it comes to creatures a ten thousandth of our size.

7. Deadlines. I mean, come on, they have the word dead in them. And the fear gets so much that I whenever I feel them coming near I have to run and hide behind the sofa. Metaphorically. For instance, this blog had a deadline. And that deadline was three days before this moment when I type these words. So this is beyond deadline, a kind of afterlifeline. And it is spooky. (Ed. Note: And yet, we found you behind the sofa, because we are the Boogeyman Blogger! And you are still alive, living to see another deadline.)

8. Parties. Parties are terrifying for writers. The act of writing is the absolute opposite of being at a party. Especially literary parties. The kind where you get a name badge and where you stand there cradling a glass of bad white wine trying to smile and act normal, while people look over your shoulder and wonder if there is someone less weird they could be talking to.

9. Reality. This is a no-brainer. If you write fiction for a living the chances are you are scared of reality. You were always scared of it. You were the kid who stared out of the window at school, imagining you were something other than the kid staring out of the window at school (astronaut, rock star, Marty McFly, Teen Wolf, a cool kid in a John Hughes movie, or sometimes just Shaun Weakes, the kid at the next table). And reality is more scary now, because you are 38 years old.

10. The idea that imagination runs out. Every time you get writer’s block you think, “This could be it.” This could be the last time you ever come up with anything ever again. Imagination is not infinite. It is like milk. Good old-fashioned cow’s milk that curdles and becomes sour or plain old cheese. One day it will happen to you. And you know this and it is terrifying.

12. Illness(es). Right now, at this moment, I have googled myself into believing I have three potentially fatal diseases, simply because I have a headache and my eyes are sore. I expect to die by at least, like, lunch. And if I was a non-writer with a proper job I would not be able to wallow and fret and be on Web MD all day. Possibly.

13. Facebook. A continual school reunion full of the scariest ghosts of all the people you grew up with. OK, this isn’t specific to writers. Just humans. 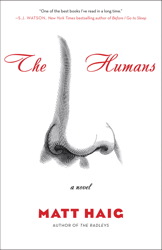 The Humans
by Matt Haig

Praised by the New York Times as a “novelist of great seriousness and talent,” author Matt Haig delivers an unlikely story about human nature and the joy found in the messiness of life on Earth. The Humans is a funny, compulsively readable tale that playfully and movingly explores the ultimate subject—ourselves.