Is it better to make your pumpkin pie from scratch—or use canned pumpkin? I found out the hard way so you can enjoy your holiday dessert for less… without sacrificing taste. From Make the Bread, Buy the Butter.

I had always used canned pumpkin for pie, because it was what my mother and grandmother used. In my family, canned pumpkin is traditional. But I liked the idea of starting with a whole food rather than a can, and what if canned pumpkin turned out to be just as inferior as canned sweet potatoes and I just didn’t know better? I baked two pies, identical except for the source of the pumpkin. Pie number one contained the flesh of a sugar pie pumpkin that I roasted for an hour, peeled, seeded, de-stringed, and forced through the food mill. Pie number two contained the flesh of a pumpkin that Libby’s had processed in a plant and I scooped out of the can.

Results: The canned pumpkin was (obviously) more convenient, and I did not have to wait for it to roast. It was also slightly more expensive—about $0.50 more than the whole pumpkin. But those were fifty cents well spent, because it made a superior pie—the flavor was bigger, rounder, more pumpkin-y. I have no idea how you get more pumpkin-y than an actual pumpkin. According to the label, Libby’s canned pumpkin contains nothing but pumpkin. Did I just have a dud pumpkin? Confusing.

My advice: When you’re standing at the supermarket the day before Thanksgiving pondering your pumpkin options, grab the can and get in the checkout line before it grows any longer. You’re not being squeamish, you’re being sensible. However, you should absolutely bake your own pie.

1. Preheat the oven to 375 degrees F.
2. In a large bowl combine the pumpkin, eggs, sugars, cinnamon, nutmeg, ginger, and half-and-half and beat until smooth. Pour into the crust.
3. Bake for 35 minutes. This is incredible served warm out of the oven, and almost as good cold.

More from Jennifer Reese:
—How to Save Money by Preparing a Thrifty Thanksgiving Meal
—Is It Um, Cheaper to Kill Your Own Turkey for Thanksgiving? 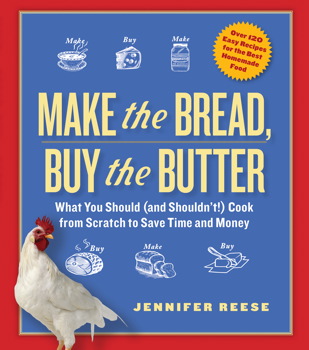 Make the Bread, Buy the Butter: What You Should and Shouldn’t Cook from Scratch — Over 120 Recipes for the Best Homemade Foods
by Jennifer Reese

Selected by the New York Times as a Notable Cookbook of 2011, by USA Today as a Best Holiday Gift “For the Foodie,” and by More.com as one of their Best Cookbooks of the Year.

With Blogger Jennifer Reese’s fresh voice and delightful humor, Make the Bread, Buy the Butter has 120 recipes with eminently practical yet deliciously fun “make or buy” recommendations. Her tales include living with a backyard full of cheerful chickens, muttering ducks, and adorable baby goats; countertops laden with lacto-fermenting pickles; and closets full of mellowing cheeses. Here’s the full picture of what is involved in a truly homemade life and how to get the most out of your time in the kitchen—with the good news that you shouldn’t try to make everything yourself.