Every bite of this soup tastes like autumn. Kabocha squash is so satisfying because of its rich squash-i-ness—and I like that it’s not as well known as butternut and acorn squashes. Plus, it’s fun to say. From Cooking Like a Master Chef.

You can use another fall squash for the soup, but whatever you use, puree only half and then mix the chunkier half with the smooth half. The epita garnish is a little time-consuming but extremely tasty. Make it when the in-laws are on their way over and you want to impress. But if you’re eating the soup in your sweatpants, just toast some pepitas instead!

1. For the pepita-coconut-lime garnish, preheat the oven to 325°F.

2. Toss the pepitas with the oil and spread them on a rimmed baking sheet. Toast in the oven for about 6 minutes, stirring once or twice to encourage even browning. Transfer to a cool plate to stop the cooking. Keep the oven on.

3. Spread the coconut on a rimmed baking sheet and toast in the oven for about 10 minutes, or until browned around the edges. Transfer to a cool plate.

4. In a small bowl, toss the squash with the yuzu juice and season with salt.

6. For the soup, in a stockpot, heat the oil over medium-high heat. When hot, add the lemongrass, onion, and ginger and cook, stirring, for about 1 minute, or until they soften slightly. Add the garlic and continue to stir for another minute or so until softened. Take care that the garlic does not burn.

7. Add the squash and the vegetable broth. The broth should cover the squash by about 1/2 inch—if not, add a little water. Let the broth come to a gentle boil and then reduce the heat and simmer for about 20 minutes, or until the squash is tender when pierced with a fork.

8. Working in batches and using a slotted spoon, transfer the squash and other vegetables to a blender in small, manageable amounts. Puree until smooth and add liquid from the pot to adjust the consistency.

9. As each batch of soup is pureed, transfer it to a clean pot. Add the lime juice and salt and stir to mix. Taste and adjust the seasoning, if necessary. Serve garnished with the toasted pepitas, coconut, squash, lime zest, and lime rounds.

NOTE: To bruise the lemongrass, put the stalks beneath the flat side of a large knife, such as a chef’s knife, and use the heel of your hand or end of your fist to hit the knife. Don’t hit too hard; you don’t want to damage the lemongrass. Light bruising releases essential oils, which heighten the flavor. It’s a technique used most often with herbs, spices, garlic, onions, and similar ingredients. 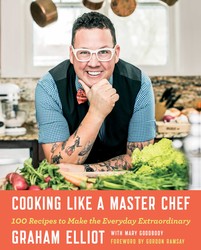 In the first cookbook from Graham Elliot, cohost of the popular Fox series MasterChef and MasterChef Junior, 100 deliciously creative recipes show home cooks the basics of cooking and combining flavors—and then urge them to break the rules and put their own spin on great meals.